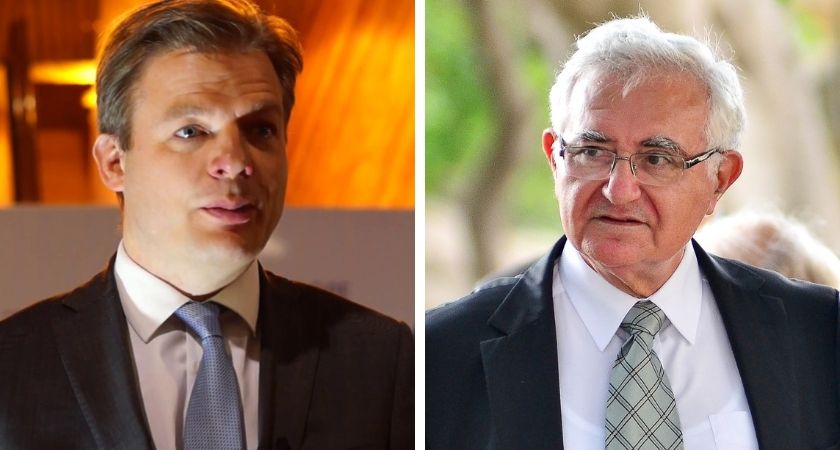 Former EU Commissioner John Dalli, has hit back at the Pieter Omtzigt, Rapporteur for the Parliamentary Assembly of the Council of Europe, accusing him of playing to the tune of a ‘perverse blogger’

Dalli accuses Omtzigt’s use of the word ‘disgraced’ as a replication of the phrasing of the ‘derogatory, hateful, vindictive vitriol of the perverse blogger.’

‘This was far beyond the bounds of fair comment especially since it is not based on any facts. The megalomaniac hate mongers in Malta are trying to spin this in Malta and you played to their tune.’

This is the counter reply to a letter sent in response to a previous one from the Dutch MP Pieter Omtzigt. In Omtzigt’s letter, he penned a response to a number of statements and questions raised by Dalli’s political record, his references in a PACE report into the assassination of Daphne Caruana Galizia and assumptions of bias.

A report on Omtzigt’s letter is given below.

Dalli explains that he had opened his account when the bank started but closed his account, ‘when doubts started to be raised about its operation’

Dalli retorts at Omtzigt’s decision to mention him in connection with the VGH contract. He explains that despite the Rapporteur not suggesting proof of his involvement, Dalli is angry that he should be mentioned.

‘You did not find my involvement to have been proved – so why mention it and throw mud? Is this your standard of the rule of law? Your opinion of the journalists merits of Ms Caruana Galizia are not shared by the hundreds of her victims and by the large majority of the Maltese people.’

Dalli outlines to Omtzigt that the conclusions from OLAF ‘where contrived’

He explains that there had been considerable criticism of the body by both its Supervisory Committee and by the media.

‘The preoccupation by OLAF that I could have put at risk the image and the reputation of the European Commission in the eyes of the tobacco producers is another clear proof of the priorities of OLAF.’

Dalli also stresses that in this instance, he had tendered his resignation in order to proof his innocence but had instead the Commission had given OLAF ‘impunity and refused to allow the Belgian Police to investigate their actions.’

Dalli’s full letter can be viewed

Using the word ‘disgraced … was well within the bounds of fair comment,’ Pieter Omtzigt, Rapporteur for the Parliamentary Assembly of the Council of Europe, has told former EU Commissioner John Dalli.

In a letter received by Newsbook.com.mt, the Dutch MP explains to Mr Dalli that he did not have to apologise for calling him ‘disgraced.’

This is followed a detailed explanation outlining findings from the OLAF Final Report from 2012, into Dalli’s resignation from the EU Commission and misconduct in office.

Omtzigt also makes mention of how Dalli was appointed as a consultant on health by the Prime Minister following the 2013 election. This had been well timed given that the Police Commissioner John Rizzo had been ready to file corruption charges against Dalli and Rizzo had been removed from the position.

‘The OLAF Final Report of 15 October 2012 found that you had “put at risk the image and the reputation of the European Commission in the eyes of the tobacco producers and, potentially, in front of public opinion” and concluded that “the inconsistency of [your] statements, together with the findings of this investigation relating to [you], could be seen as a serious breach of [your] duty to behave in keeping with the dignity and the duties of [your] office.” In the light of this report, you tendered your resignation as a European Commissioner to then European Commission President Barroso. In June of this year, the EU General Court comprehensively dismissed all of your criticisms of the handling of your case by OLAF and the European Commission. I recall that the General Court had already rejected your case for unfair dismissal by President Barroso. Whilst you may not accept these judgments, I have no reason not to do so myself. I also recall that the Council of Europe’s Group of States Against Corruption (GRECO) has criticised the fact that in Malta, “former officials who have been embroiled in dubious dealings or actions are given prominent governmental functions, in the absence of any policy requiring a clean reputation to be appointed at the highest levels. For instance, a former Maltese Health Commissioner of the European Commission, who was forced to resign by president Barroso following allegations of bribery from the tobacco industry, was appointed special adviser for health matters in the Maltese Government in 2013” (Fifth Round Evaluation Report, 22 March 2019). I further recall the similar observations made by the European Parliament’s inquiry committee, which found “disturbing” the fact that, following your resignation, you were made an advisor to the Maltese Prime Minister, “instead of being prosecuted for bribery and corruption charges, despite substantial evidence in investigations and reports by OLAF and Malta’s own FIAU” (Mission Report following the ad-hoc Delegation to Malta (30 November – 1 December 2017), 1 January 2018).’

This is just one of three replies in a letter presented by the Dutch MP in response to one from Mr Dalli, in which the latter accuses the former of being, ‘shallow and irresponsible’ and of repeating unsubstantiated information from so-called ‘hate mongers.’

The recently approved PACE report; ‘Daphne Caruana Galizia’s assassination and the rule of law in Malta and beyond: ensuring that the whole truth emerges’ report. The above references were made to Dalli within the details of the document.

“Disgraced?” John Dalli asks Omtzigt, as he hopes for a public apology

Omtzigt’s letter also references Dalli’s criticism of the report having been made up of material from a Maltese ‘prompter’.

The Dutch MP responds that the person whom Dalli is referring to does not exist. He insists that the details of the report are ‘entirely my own work and I take full responsibility for it.’

‘You do not state the name of the person whom you suspect of having played this role and unfortunately my knowledge of Maltese domestic politics is insufficient to identify any particular individual from your description. That is, however, by the bye, as nobody, whether from Malta or elsewhere, ‘prompted’ me to include certain information or to use certain expressions in my report,’ Omtzigt says.

In the latter half of Omtzigt’s reply, the Dutch MP responds to Dalli’s questions about people identified in the lucrative Vitals Global Healthcare contract, a story Daphne Caruana Galizia had been investigating.

While Dalli suggests that Omtzigt had identified him as one of those involved, the latter explains that Dalli was named but that his involvement cannot be proven. Instead, this had been a reference to him in the report.

‘I included this reference as a possible identification of the third person involved in the particular activity mentioned, given Ms Caruana Galizia’s outstanding overall track-record as an investigative journalist. This does not mean that I find your involvement to have been proved; for the purposes of my report, which were to describe the strong suspicions of impropriety surrounding the VGH contract, it was not necessary to pursue the point thus far. I note that a magisterial inquiry has now been opened into the matter, which may shed further light upon this aspect.’

Reading too much into it

Omtzigt also questions Dalli’s interests and dealings with Pilatus Bank, one that has been known for being involved in money laundering.

He asks why the former EU Commissioner had to spend €1000 to enquire about the bank’s services when this could’ve been done freely.

‘In this case, not only are you imagining the existence of a ‘prompter’, you are also reading more into the text than it was intended to convey. Since you mention these possible connotations, however, I would agree that it seems peculiar for a person in your position to engage with a bank such as Pilatus, whose business model and operations have since been exposed as highly dubious to say the least, entrusting it with the not insignificant sum of €1000 merely in order to “see what services they offer”, when a simple enquiry would surely have provided the same information for free.’