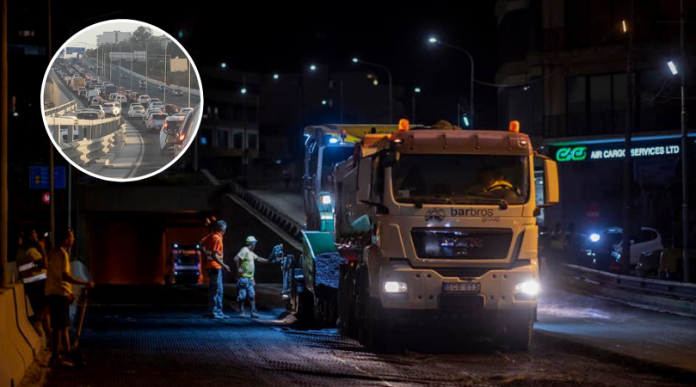 The Regional Road project is in its last phase. The project includes the reconstruction and the widening of party of this primary artery between the Tal-Qroqq tunnel and Santa Venera, into six lanes, three in each direction.

In a statement the Ministry of Infrastructure explained that over the course of this week, part of the southern carriageway, exiting from under Tal-Qroqq tunnels in the direction of Santa Venera was given a first layer of asphalt. The ministry explained that a retaining wall on the side of the bridge is currently also being constructed.

The central strip was removed and is being replaced with a safer one through the installation of crash barriers that limit the consequences of accidents.

“The Regional Road project is another one of a series of projects that we have implemented along this main artery that joins the North of Malta to the South,” Infrastructure Minister Ian Borg said on Saturday. He added that the project completion is scheduled just in time for the feast of the Assumption of Mary.

The lane that will be added within the Northbound carriageway, from the Santa Venera tunnels towards Msida will be providing safer access from the slip roads that join Triq il-Wied in Msida, Triq il-Ferrovija l-Antika in Birkirkara and Triq Kappillan Mifsud in Santa Venera with Regional road.

The ministry observed that further up, part of this new lane has been completed and has been already opened to traffic, in order to minimise the travelling time when one exits from Regional Road into the slip road that leads to Birkirkara Bypass, University of Malta and Mater Dei Hospital.

3 ta' Lulju 2020
We use cookies to ensure that we give you the best experience on our website. If you continue to use this site we will assume that you are happy with it.OkCookies Policy