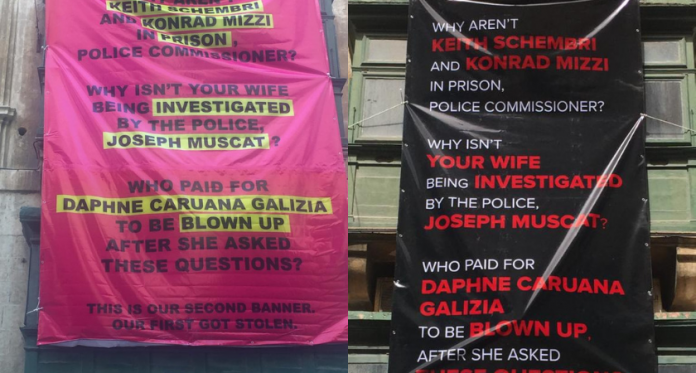 The First Hall of the Civil Court found the Planning Authority acted illegally when it removed a banner placed on Old Bakery Street by the family of slain journalist Daphne Caruana Galizia, finding the Authority in breach of the family’s fundamental right to freedom of expression.

“We hope that today’s important judgement inspires people to demand that the government respects the law and the inalienable rights of its citizens. We hope, too, that the government will use its power to ensure – and not inhibit – justice for Daphne,” the family said in a statement after Tuesday’s judgement.

The First Hall of the Civil Court in its Constitutional Jurisdiction slammed the Authority for the way it operated and highlighted the lack of paper-trail in the PA’s decision making process.

The widower and her three sons had filed a constitutional case against the Planning Authority over the removal of banners from Old Bakery Street placed on private property in March and April.

The banners which were affixed to a private property asked the following questions.

On 3 April, a notice was affixed to the property saying that the banner would be removed as it breached Legal Notice 36 of 2018. The banner was effectively removed on 7 April by the authorities. The family not being aware of the action that was taken by the authorities reported the incident as theft.

A second similar banner asking the same questions was affixed to the same property on 15 April which was removed within 12 hours.

The court which was presided over by Madam Justice Lorraine Schembri Orland, who held her last sitting before taking up her post at the European Court of Human Rights to which she was elected by the Council of Europe.

The court said that the banners in question had a powerful and strong message, which was aimed at persons or institutions which are responsible for the investigation of slain journalist Caruana Galizia and to bring to justice those who have ordered her murder.

The court stated that the family has the right to insist that the institutions are accountable.

The court noted that the enforcement report was treated as an urgent matter by the Authority.

From the testimony given by PA’s CEO Johann Buttigieg it emerged that the work carried out by his office lacks transparency, accountability and clarity required. The removal order was given verbally and was never formally written down.

Principal Direct Action Officer, Carmel Gafa described the Authority as “paperless” with decisions taken not minuted in his testimony. Meetings were direct action was decided also were executed without being minuted.

When Gafa was asked why there was urgency in this case, he said that there was a certain type of message, with the authority considering it as urgent. However the complaints received were not documented and the no enforcement file was compiled about the case.

Gafa said that for him, the billboard contained a message not an advert.

The court concluded that the actions of the authority went further than the mandate given to the authority by law, and resulted in the effective censorship of private citizens, and therefore constituted a violation of the plaintiffs rights.

The court quoted case law regarding freedom of expression, and said that it is clear that the Planning Authority acted without justification in an arbitrary and abusive way.

The court said that it agreed that the message of the banners was political, as the text insisted on the state being held accountable.

The court further said that vague and not proven references to reports and complaints on social media, or from unidentified members of the public, are not to be given any importance. Further the court added, that even if there were complaints a democratic society is not led by mob rule, but on principles that give the highest protection to political expression.

The court found that there was no pressing social need for the removal of the banners. Further it resulted that the Authority did not carry out an internal exercise to consider the impact of the messages in the framework of higher laws of the contrary, a duty by which is bound as an agent of the state.

As a remedy, the court ordered the authority to pay each one of the plaintiffs €5,000.

20 ta' Frar 2020
We use cookies to ensure that we give you the best experience on our website. If you continue to use this site we will assume that you are happy with it.OkCookies Policy