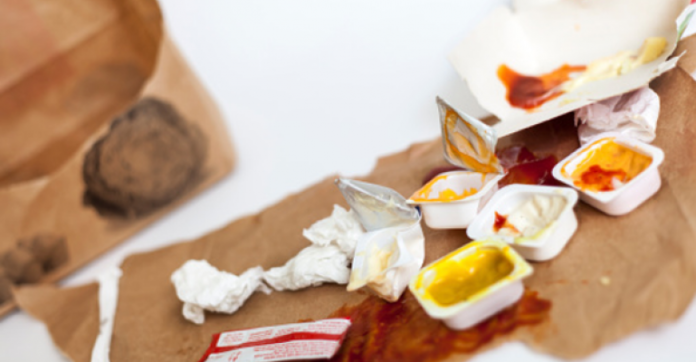 A seminar made me think about food waste and food packaging. A survey was sent to the general public regarding this topic and later on, a questionnaire was sent to fast food companies.
The general public was asked 6 questions: the first one was how many times they eat fast food, with 2.50% saying everyday, 22.50% a few times a week, 35% a few times a month, 36.25% less than a few times a month and 3.75% who never eat fast food. The second question was how many of the fast food they purchase is left over – about 14% on average.
The third question is asked about what they do with left over fast food, 44.30% do not generally have any left over, 29.11% eat leftover food later on, 12.66% throw it away, 5.06% place it in a compost bin at home, 6.33% organic waste is collected at their locality and 2.53% give the leftover food to their dog. The fourth question was how much of the packaging provided is recyclable, the answer was 52% of the packaging.
The fifth question was what do you do with packaging that is not recyclable, with 80% saying they throw it away, 18.75% try to use it and 1.25% use it for arts and crafts at school. The sixth question was what they do with packaging that can be recycled: 20% throw it in the black garbage bag, 71.25% place it in the grey garbage bag and 8.75% reuse it.
A questionnaire was then sent out to fast food companies around Malta, based on the survey answers that we received. We asked what do you do with uncooked expired food. The main answer was that they dispose of it and the second main answer was that they hardly have any.
What do you do with cooked fast food: the main answer was that they give it away, either to the staff or donate it to local orphanages. We asked if they separate waste at their outlets, the main answer was yes but a company does not have a metal bin at their shopping complex in Sliema.
We asked if their packaging is made from any recyclable material, the answer was no. But when we asked if any of the packaging used is recyclable the answer was 50% yes and 50% no.
We asked for suggestions to encourage other companies to separate waste, but the main answer was that in Malta we are on the right path when it comes to recycling, although individuals need education when it comes to separating waste.
In Malta food waste was reduced by 100kg per capita in 2017, according to the European Commission. This is the least in Europe in food waste.