I walked into the cinema at Spazzju Kreattiv to watch Asif Kapadia’s documentary Diego Maradona with some trepidation. After all, although I of course had a smattering of knowledge about the footballer’s life including the famous ‘hand of God’ incident, I am by no means too cognisant of the football scene (that sentence may be the understatement of the century)… would I have a clue about what was going on?

I needn’t have worried. The documentary is so well-crafted that it was impossible not to be drawn in. And, in a way, my lack of football knowledge helped as I did not know the outcome of many of the matches played in the past, which made it even more nerve-wracking (in a good way).

Kapadia is renowned for his documentaries about known figures with a tragic outcome. Both his first feature-length documentary Senna in 2010 (which depicted the life and death of Brazilian motor-racing champion Ayrton Senna) and his 2015 documentary Amy (which featured Amy Winehouse’s life and her struggle with substance abuse) were critically-acclaimed. Senna won the Best Documentary and Best Editing Bafta, while Amy garnered an Academy Award and a Grammy Award.

Kapadia has stated that, “Maradona is the third part of a trilogy about child geniuses and fame.” 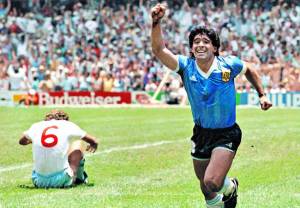 Diego Maradona sees the first time that the filmmaker tackles (pardon the pun) someone who is still alive. With Kapadia’s other two subjects, the ending was a foregone conclusion. This, of course, is not the case this time.

In a similar vein to his previous documentaries, Kapadia relies heavily on existing TV footage, as well as 500 hours of never-before-seen footage from Maradona’s personal archive.

The documentary is made up of impressive filmmaking (here I am including the brilliant editing) and great insight into this legend, who many believe is the greatest footballer of all time.

Instead of ‘talking heads’ – the staple ingredient of most TV documentaries – we never see the faces of the people doing the voice-overs, just their names. This is a technique which I found highly effective as it keeps you in the moment rather than changing your focus. 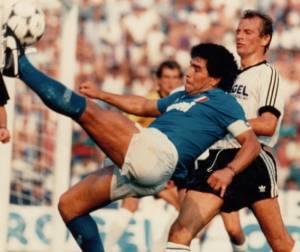 Watching Maradona play on-screen was eye-opening for me. Physically, he may not have had much going for him, but what he lacked in body-shape, he more than made up for in speed, tactics and sheer intelligent on the pitch. He always seemed to be a couple of steps ahead of everybody else. At times, it’s like watching a beautifully-choreographed fast dance.

Kapadia’s documentary touches on Maradona’s childhood in the slums of Villa Fiorito in Buenos Aires, as well as his contract for Argentinos Juniors at the age of 15, when he moved his entire family into an apartment and became the breadwinner.

However, the bulk of it centres round his time in Naples, Italy, where he arrived on the 5th July 1984, after a not exactly gracious exist from Barcelona. In those days, Napoli were not one of Italy’s greatest teams; in fact, they had never even won a league title and were fighting relegation.

In a way, I suppose that the documentary is a story of two underdogs; Maradona had hardly covered himself with glory at Barcelona and, at the time, the Napoli football team was seen as a bit of a joke; their players – and inhabitants – routinely derided as being ‘unwashed’ and ‘plague-ridden’.

When Maradona finally led the Napoli team to its national victory in 1987, he was considered to be their bona-fide saviour. Street celebrations went on for two months. A banner outside the local cemetery proclaimed, “You don’t know what you’re missing”. 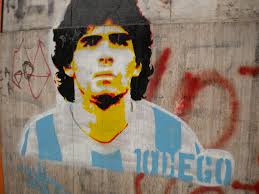 The people of Naples had shrines to Maradona in their homes; right next to pictures of Jesus and San Gennaro, their patron saint.

The footballer’s move to Naples resurrected his career… and ultimately led to his downfall. Maradona’s former fitness coach Fernando Signorini puts it thus: “I learnt that there was Diego and Maradona. The insecure kid and the character he came up with.”

We see Maradona getting involved with the Camorra, siring a child out of wedlock, and finally, developing an fully-blown addiction to cocaine.

As a non-‘football aficionado’, I had no idea of Maradona’s conflict of loyalties when Argentina played Italy in the Naples stadium during the Italia ‘90 World Cup. He made the error of saying that Neapolitans should support Argentina against Italy… and paid the price when Argentina won. He quickly turned from saviour to devil. Furthermore, he lost the ‘protection’ of Naples’ Camorra and legal establishment and was eventually arrested for drug possession, amongst other charges.

During the documentary, one of the interviewees sums him up as: “A bit of cheating and a lot of genius”; a fitting way to describe this warmly charismatic and super-talented, yet very flawed, figure. 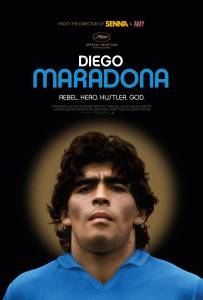 Newsbook.com.mt readers are in with the chance of winning two tickets for Diego Maradona showing at Spazzju Kreattiv on Friday 19th July 2019.

Send the answer to the question:

Which singer-songwriter did Asif Kapadia feature in his 2015 documentary?

via email to coryse@newsbook.com.mt by latest Friday 12th July at noon. The winner will be chosen at random.

You can watch the trailer here.