Żurrieq local council has come out strongly against the proposed elderly home on a tract of land which is situated in area designated as out of the development zone, known as l-Għadir.

A 129-room old people’s home is being proposed on a tract of land found between Ħal Safi, Ħal Kirkop and iż-Żurrieq. The proposed development will consist of one level of basement parking and three recessed levels. Ancillary amenities are also being proposed.

In a statement on Monday, the council said that it will formally object against the proposed development saying that the site should remain as is and only be used for agricultural reasons.

The council noted that from its evaluation the proposed elderly home would be developed on a tract of land which was situated well outside the development zone and far away from the residential community. It maintained that despite the urgent need for an elderly home in the area, the use of land which is designated in the rural zone was not justified.

L-Għadir should remain a buffer between the neighboring localities, the council said.

The local council remarked that while an elderly home was urgently needed in the area, ideally this should be within the development zone and close to the residential community. It added that it had carried out an exercise and identified a suitable site in the past. 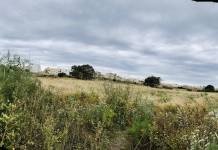 Residents have joined forces and started campaigning under “Save l-Għadir”. They have called on the public to register their objections against the proposed development and have urged the local councils of the vicinity to protect the undeveloped area.

Strong objections and opposition to ODZ development in L-Għadir

Third time ‘no’ for old people’s home at Wied Għomor

Coryse Borg   May 29, 2020
The Dean of Canterbury's pet cat Leo made a special appearance in one of his online morning prayer videos recently, turning it into a viral hit.

Monique Agius   May 30, 2020
The Commonwealth General Secretary congratulated Malta for doing the best in the whole of Europe by 'protecting the people, galvanising the quintessential Maltese energy and kept safe'.

Monique Agius   May 30, 2020
The eggs are expected to hatch some time between the middle and end of July.

Businesses doing worse than when closed, Chamber of SMEs says