So called zoos are unnecessary and undesirable ADPD said on Tuesday highlighting that they are just vanity projects with no benefits for conservation.

In a statement reacting to the draft legal notice on the Keeping of Wild Animals in Zoo Regulations, ADPD noted that the disruption to the lifestyles of wild animals both accidental and deliberate resulted in suffering, death or even extinction.

“The prevailing assumption that animals can be used for any purpose that supposedly benefits humankind is not acceptable,” ADPD said, adding that the proposed regulations did not ‘strengthen the role of zoos in the conservation of biodiversity’, nor do they ‘protect the health and wellbeing of wild animals’.

The deputy chairperson of ADPD Mark Zerafa remarked that the proposed subsidiary legislation departs from the point that it is acceptable to keep wild animals in zoo, particularly animals, such as large cats and other animals, which animals’ natural environments cannot in any way and by any stretch of the imagination be replicated in Malta.

“Any permits for ‘zoos’ should be based on whether these benefit the animal concerned. Licenses should only be granted to bona fide research-led establishments involved in either captive breeding of endangered species for eventual return to the wild or else to those offering genuine sanctuary to animals unable, through injury and other cause, to be returned to the wild and where their living conditions are as close as possible to the animal’s natural habitat. In Malta this would mean the breeding or sanctuary to fauna which occur naturally here, or the reintroduction of species which have become rare, certainly not lions, tigers and giraffes,” ADPD said.

The party described zoos as a money making exercise at the expense of the welfare of animals which are kept in artificial enclosures. It also warned against zoochosis – a condition which animals in captivity develop due to stress and frustration and which is further exacerbated when visitors are allowed to pet them and pose for pictures with them.

ADPD stressed that zoos are unnecessary and undesirable, as it called for such projects to be phased out.

“While the proposed regulations may set minimum standards for animal welfare, although government has already given in and will allow wild animal petting, the fact remains that private collections of animals just for the sake of it should be phased out.”

On Monday, it emerged that a total of 64 tigers are known to be kept in Malta. The data was tabled in parliament. 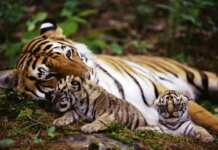