The mother and brother of Chantelle Chetcuti who was stabbed to death in February are expected to testify today during the gathering of evidence against a 33-year-old man accused of her murder.

10:37 Thank you for following Newsbook, We shall be with you shortly in another section of the portal.
Sylvana Debono
10:32 The next sitting will be on the 11th September at 10:00h
Sylvana Debono
10:30 Court responded that while it had no objection to the further witnesses to be called by the prosecution, it denied freedom from arrest.
Sylvana Debono
10:29 The prosecution will be asking two further witnesses to testify
Sylvana Debono
10:22 Chantelle's daughter wants to testify through videoconferencing.
Amy Borg
10:20 The defence is requesting bail.
Amy Borg
10:18 Defence lawyer Franco Debono says that the main witnesses have given their testimony.
Amy Borg
10:12 He is not present. The court will issue him a fine of €100.
Amy Borg
10:12 Next to take the witness stand is Dylan Meilak.
Amy Borg
10:09 Miriam Chetcuti's testimony ends here for today.
Amy Borg
10:09 At around 8/9pm Chantelle's mother received a call and was told to go to the Police Station.
Amy Borg
10:08 She left the house at around 4 pm or 5 pm. She said she was not going to stay out long as she wanted to watch a particular TV programme.
Amy Borg
10:07 On the day of the murder, Chantelle was going for a hike with her cousins but she changed her mind and decided to go with a friend to play billiard.
Amy Borg
10:06 She also says that he used to be sweet with her at times but then cheat on her.
Amy Borg
10:05 The mother says that Chantelle used to tell her not to say anything and he can harm her and her family.
Amy Borg
10:04 "He used to tell me, I will kill her" – Chantelle's mother.
Amy Borg
10:04 During the last three days before the murder, the accused followed Chantelle everywhere she went and used to wait for her in front of her mother's house.
Amy Borg
10:03 Miriam Chetcuti presents photos of Chantelle's injuries.
Amy Borg
10:02 Another incident dates back to 7 to 8 years ago when he punched her in the face. He took her to the polyclinic and told her to say she fell down the stairs.
Amy Borg
10:00 Miriam mentions a particular incident when Chantelle was in bed and Justin hit her in her back and she fell on the ground. The next day he told her "Is it true you got hurt?", said Miriam.
Amy Borg
09:59 Chantelle had told her mother to drop the case as she was scared of him.

Miriam said that her daughter told her "I know what he is capable of doing."
Amy Borg
09:58 Miriam Chetcuti says how the year before the murder, her family ended up in court against Justin's family but he had threatened her to drop the case otherwise she will not see her children anymore.
Amy Borg
09:56 She also says that when they used to live together, the accused used to spend nights out only to return home drunk in the mornings.
Amy Borg
09:55 Chantelle's mother recalls how last year her daughter spend almost three days wearing a scarf. She later learned that the accused had grabbed her by her neck.
Amy Borg
09:54 Miriam was asked if she had ever seen the accused beating her daughter. 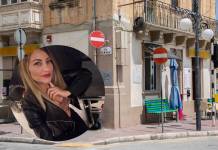