Yorgen Fenech, owner of Dubai company 17 Black and subject to intense police questioning will be given again police bail this evening as he was set to spend the night at Mater Dei hospital. It is unclear whether Fenech will be spending the night at Mater Dei or elsewhere as a police spokesperson said that no details of his whereabouts would be given.

enech was hospitalised earlier after complaining of chest pains. He was checked by the police doctor and taken to hospital as a precaution.

The investigations are set to continue.

The story so far
Timeline of a Maltese tragedy 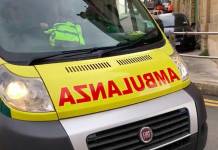