Yorgen Fenech’s legal challenge of the Cabinet’s decision to deny him a presidential pardon has been rejected in Court over a technicality, as proper procedure had not been followed.

Fenech, the former Tumas Group CEO who is accused of ordering the murder of Daphne Caruana Galizia, had asked for the pardon to reveal everything he knew, but his bid was unsuccessful.

Last November, his legal team filed an application to obtain judicial review of the decision taken by the Joseph Muscat cabinet, asking the court to annul said decision so that it may be reviewed.

Fenech had pledged to reveal information on Muscat’s chief of staff Keith Schembri, and questioned how the request for a pardon was at the mercy of Muscat himself. He had also been revealed to be the owner of Emirati company 17 Black, which emails suggested would funnel funds into offshore structures set up by Schembri and disgraced former minister Konrad Mizzi.

But the State Advocate pointed out that the application had not been preceded by a judicial protest or an official letter, in line with procedure. In light of this, Judge Francesco Depasquale had to declare the action to be null.

Watch: A request for pardon will be seen through due process – Abela 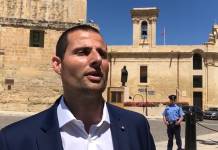