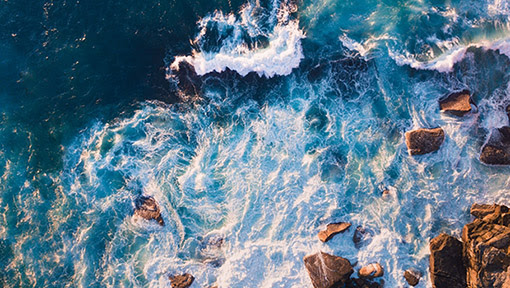 To mark World Oceans Day on 8 June, Commonwealth Head of Oceans and Natural Resources Dr Nicholas Hardman-Mountford shares how his organisation’s Blue Charter is a beacon of hope for the future of ocean governance.

In the depths of the Pacific Ocean, 11,000 km beneath the sea surface, lies the deepest known point in the Earth’s seabed known as the Challenger Deep. On this pitch black patch of the Mariana Trench, temperatures are just above freezing, and the ocean pressure is comparable to a one kilo weight on a single fingernail.

Here, just a few weeks ago, undersea explorer Victor Vescovo returned from the deepest ever solo expedition, only to report that he witnessed a plastic bag and candy wrappers, floating glibly on the ocean floor.

On this year’s Ocean Day, this disturbing find reminds us of two facts. The first is the scale not only of marine pollution, but the plethora of challenges the world faces in terms of ocean health. The second is the incredible opportunity we have to cooperate on a global scale to protect and manage one of our most precious natural resources.

A historic step towards united action

The Commonwealth covers a third of the world’s coastal oceans and nearly half of its coral reefs. The majority of the world’s small island developing states (SIDS) are Commonwealth, although they can be more accurately dubbed ‘large ocean states’ due to their vast oceanic domains or exclusive economic zones. Forty-six out of 53 Commonwealth members have a coastline, and three of the remaining landlocked states border great lakes.

For these countries, the ocean is everything – it represents their home, their livelihood, their history, culture, and their future.

Yet this future is under unprecedented threats. Global warming is causing ocean heatwaves that bleach kilometres of reefs; foreign trawlers are depleting fish stocks – often illegally; sea level rise is flooding homes and salinising the soil, and plastic junk is polluting waters and beaches while contaminating food supplies.

Over 25 countries have signed up to these action groups, and counting.

Action-oriented and member-driven, the success of the Blue Charter is dependent on the level of passion or commitment from the countries to set goals, forge partnerships, and mobilise together. We believe this creates deeper and more enduring actions.

Key progress made by countries in implementing the Blue Charter includes:

We have also received tremendous encouragement from the private and philanthropic sectors, for example:

The first Commonwealth Blue Charter ‘All Champs’ conference on 18-21 June 2019 will bring together champion countries with international partners to strategise on more concrete actions to address our ocean priorities, and help achieve Sustainable Development Goal 14.

The momentum for action is rising, and there is a hope that the Commonwealth Blue Charter will help spur lasting global change towards sustainable ocean governance.

The views shared in the above opinion piece are those of Dr Nicholas Hardman-Mountford, Head of Oceans and Natural Resources at the Commonwealth, and not of Newsbook.com.mt.