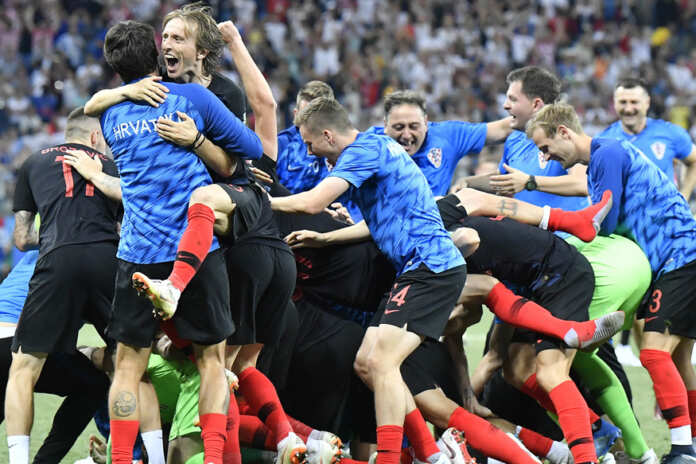 While most U.S. Catholics are only casual football fans, many, just like more than 3 billion people around the world, will watch the 2018 FIFA World Cup Final. But who of the two historically catholic countries will they support?

The Catholic News Agency analysed both countries’ catholic roots, saints and cathedrals in attempt to answer the aforementioned question.

Jeusus libved in Palestine, at a time in which Croatia, along with thre rest of the Balkan Peninsula was part of the Roman Emprie – most of which was part of the Roman Province, Dalmatia. At the time Jesus lived, there was a Jewish population in the region. Some members of the Jewish community became Christians during the earliest periods of Christian evangelization. Scripture records that Titus, a disciple of St. Paul, travelled to Dalmatia, and he might have died there. The region is mentioned in St. Paul’s Second Letter to Timothy.

Furthermore, some old traditions suggest that  St. Paul might have gone to Dalmatia too, since he wrote about visiting “Illyricum,” in his Letter to the Romans, however he probably was referring to a part of Greece close to modern-day Albania.

The Croatians, who migrated to the Dalmatian region in the 6th century, most probably followed tribal religions until natives to the region, along with Byzantine and Benedictine missionaries, some from France, converted them to Catholicism. By the 9th century, Croats could be considered Christians. By the end of that century, Croatian nobility had begun pledging their allegiance to the pope.

France is often referred to as the “eldest daughter of the Church,” because of its long and faithful history of the Catholic Church there.

Many early legends connect France and New Testament figures. One such legend says that Lazarus, Mary, and Martha were exiled from Israel and travelled by boat to France’s Mediterranean coast. Another says that Lazarus was the first bishop of Marseille, and that he is buried in Burgundy. Some such legends say that Mary Magdalene, Lazarus’s sister, made the trip, and then lived for 40 years in a cave in Provence – France’s famous madeleine cookies are sometimes said to be named for Mary Magdalene.

The earliest non-legendary record of the Church in France begins in the 2nd century, when 48 Catholics, including the Bishop of Lugdunum, were martyred in Lyon, which was then part of the Roman province of Gaul.

Most French people consider King Clovis I to be the founder of France. Clovis converted from paganism to Catholicis. He was baptized on Christmas Day in 496 by Saint Remy. Clovis’s baptism is considered to be the foundational moment of western Christendom.

Therefore, Croatia is mentioned in the Bible, while any place mentioned in Scripture only has a strong claim on while France’s, the Church’s eldest daughter’s, ancient Christian roots. Therefore, the point goes to Croatia.

St. Jerome was born in the region of Dalmatia. So was St. Marko Krizin, a priest of the Counter-reformation, and St. Leopold Mandic, a pious Capuchin missionary. St. Nicholas Tavelic was a Croatian Franciscan, who was martyred in 1391 in Jerusalem after refusing to convert to Islam, along with 3 Franciscan companions.

In 2003, Pope St. John Paul II dedicated a church to the Croatian martyrs, soldiers who were slaughtered by invading Ottoman forces in the 15th century. Hundreds of thousands of other Croats have faced martyrdom and persecution, and died holy deaths in discipleship of Jesus Christ.

Therefore, while Croatia has presumably given the Church many holy men and women, but many of them remain unknown while France has a lot of recognized saints. Therefore, without any doubt, CNA gives France this point.

The Cathedral of the Assumption of the Blessed Virgin Mary is absolutely stunning. This gothic-style cathedral was built in the 1200s, and restored in the 1880s. There are barricades around the cathedral that were built in the 1400s to hold back Ottoman invaders. Those same barricades held back the Ottomans in another invasion attempt 200 years later. Zagreb’s cathedral has also survived an earthquake.

The cathedral at Chartres is considered to be the highpoint of Gothic art and architecture. Its stained glass is world famous and has been imitated around the world. Built in the late twelfth century, it has been restored several times. During World War II, an American colonel snuck behind German lines to ensure it was not being occupied by the Germans. His heroism ensured that the building was not bombed by the Allies.

Therfore France’s Chartres is famous while Zagreb’s cathedral should be more famous. One is considered the high-point of European architecture, while the other held back hordes of Ottoman invaders, respectively. This category is a tie.

Will the Church support its “eldest daughter,” or the team whose coach loves the rosary? Leave your comments below.