A 20-year-old woman admitted to trafficking heroin, crack cocaine and cannabis from a garage in Marsa on Tuesday.

Kimberly Aly from Vittoriosa, was arrested on Monday during an operation led by the Drug Squad. The Rapid Intervention Unit raided the entire building while the Special Intervention Unit entered the building by cutting through an iron door used as an access point, with the rest of the garage door being bolted from the inside with bricks. 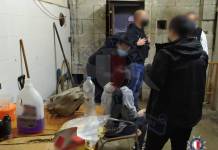 The police found 110 sachets of cocaine, 63 sachets of heroin and 15 sachets of crack cocaine, as well as a considerable amount of cash. The drugs were wrapped up, ready to be sold.

Appearing in court on Monday, Aly was charged with possessing and supplying the drugs in circumstances which indicated that they were not for her personal use.

Defence lawyers Franco Debono, Amadeus Cachia and Francesca Zarb sought bail for Aly. The prosecution did not object, noting that she had already pleaded guilty and was five months pregnant.

The accused was granted bail against a deposit of €2,000 and a personal guarantee of €10,000. She was ordered to sign a bail book twice a week. A curfew was also imposed on the woman and she was banned from entering Marsa.

The court was asked to convert itself to a drugs court when sentencing her by the defence team.

Magistrate Astrid May Grima presided over the court.

Cedric Farrugia   January 26, 2021
A healthy diet does not have to be sustainable, but a sustainable diet needs to be healthy said Prof. Burlingane. She said that there is a need for a holistic approach between agriculture, nutrition/health and the environment.