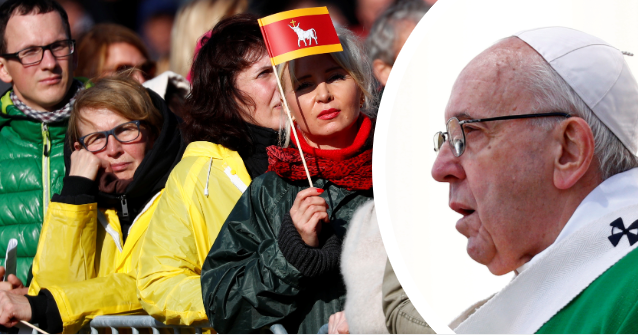 KAUNAS, Lithuania  – Pope Francis said on Sunday that society should be vigilant for “any whiff” of resurgent anti-Semitism, calling for new generations to be taught the horrors of the Holocaust. He made his appeal in Kaunas, Lithuania’s second city, on the 75th anniversary of the wartime liquidation of the ghetto in the capital Vilnius. Two years of Nazi oppression in which tens of thousands of Jews were killed or deported culminated on Sept. 23-24, 1943.

“The Jewish people suffered insults and cruel punishments,” Pope Francis told a crowd of about 100,000 at an open-air Mass.

“Let us … ask the Lord to give us the gift of discernment to detect in time any seed of that pernicious attitude, any whiff of it that can taint the heart of generations that did not experience those times,” he said. Pope Francis, who was due to visit a monument to the ghetto victims later, was using the anniversary to make a broader appeal beyond Lithuania, a papal aide said.Reports of anti-Semitic acts have increased in Europe, coinciding with the rise of populist, right-wing parties in a number of countries.

In May, Germany reported 1,504 anti-Semitic offences for 2017, up from 1,468 in 2016. The previous month, thousands of Germans wearing skull caps took part in nationwide rallies in support of the Jewish community.France was shocked in March by the murder a Holocaust survivor in a suspected anti-Semitic attack, and Britain’s main opposition Labour Party is embroiled in an anti-Semitism row.

More 200,000 Lithuanian Jews were murdered by the Nazis, aided by some locals. The country’s Jewish community today numbers about 3,000. In the homily of the Mass, Pope Francis referred to those who collaborated with the Nazis in World War Two or with Communist authorities in the period between 1944 and 1991 when Lithuania was part of the Soviet Union.

“Earlier generations still bear the scars of the period of the occupation, anguish at those who were deported, uncertainty about those who never returned, shame for those who were informers and traitors,” he said.

On Sunday afternoon the Pope was visiting the Museum of Occupations and Fights for Freedom, a former Soviet KGB prison in Vilnius where hundreds were murdered and thousands, including many priests, shipped off to Siberia.

Monique Agius   April 4, 2020
Bishop Galea-Curmi urged the public to reach out to others especially those who are suffering from loneliness and the elderly. He remarked that one can use social media to keep in touch with one's loved ones.

We need to reach out to those who are alone –...