“The problem with lack of action with sexual abuse included that by Cardinal McCarrick, is clericalism. In a clerical culture, priests, bishops and cardinals are given the benefit of the doubt. It is believed that they always say the truth and they are believed more than any rumours or reports.”

Elise Ann Allen, formerly Harris, the Rome Senior Correspondent with the Catholic news website Crux, was answering questions by Fr Joe Borg for Newsbook.com.mt about the over 400-page report published on Tuesday by the Vatican titled the “Holy See’s Institutional Knowledge and Decision-Making Related to Former Cardinal Theodore Edgar McCarrick (1930 to 2017)”.

In July 2018 Cardinal McCarrick was forced to resign from his position in the Church leadership after a separate review concluded that claims he had sexually abused a 16-year-old boy were credible. Pope Francis then commissioned a report to study how it was possible that McCarrick kept on advancing from one ecclesiastical position to another higher ecclesiastical position in spite of the fact that there were many rumours and reports circulating about his sexual advances to and sexual abuses with several men including seminarians.

Read Also
McCarrick Report: a sorrowful page the Church is learning from 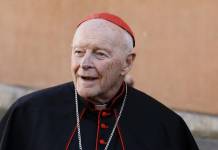 What the Report says

Allen said that the report does not mention one or two persons who are responsible for the lack of action but lists several institutional deficiencies and shirking of duty by several which led to this debacle.

Fr Joe Borg presented Allen with a summary of what, according to the media, the Vatican report states:

“Several media reports of the Vatican document are saying that what McCarrick was doing was known during the pontificate of St Pope John Paul II but for a number of reasons no action was taken. They add that Pope Benedict did not take action because he believed that the issue was well investigated at the time of Pope John Paul II and since no action was taken he concluded that there was no action that should be taken. Pope Francis did the same till another credible report of abuse of a minor surfaced in 2017.”

The Special Correspondent of Crux answered that this is an accurate assessment of what the report says.

She added that maybe Francis had heard some things but he trusted what his predecessors did.

“During the pontificate of Pope John Paul II, there were four different complaints, one of them by a seminarian, and as a result, McCarrick’s appointment as Archbishop of  Washington was blocked. But McCarrick appealed directly to the Secretary of the Pope at a time that the Pope was already suffering a not give him more burdens.  McCarrick’s strong denial was believed and he was appointed as Archbishop of Washington despite the fact that rumours had been circulating for 20/30 years.”

She added that during the pontificate of Pope Benedict restrictions were imposed on Card McCarrick because of the rumours that continued spreading. Allen explained that these were not canonical sanctions but prudential action that he keeps a low profile, but McCarrick ignored them and continued with a high profile.

“The Church has to examine how seriously the Church takes such rumours” said Allen.

Cardinal Parolin said that this was a sad day but expressed the belief that there is always hope if everyone in the Church does his duty.

Allen agreed with Parolin that this is a sad day laced with hope.

“For the Vatican to come to a point to publish the 400-page report, publishing their mistakes is a massive step forward in terms of accountability and transparency and their desire to get on top of this crisis. That point can’t be  lost.”