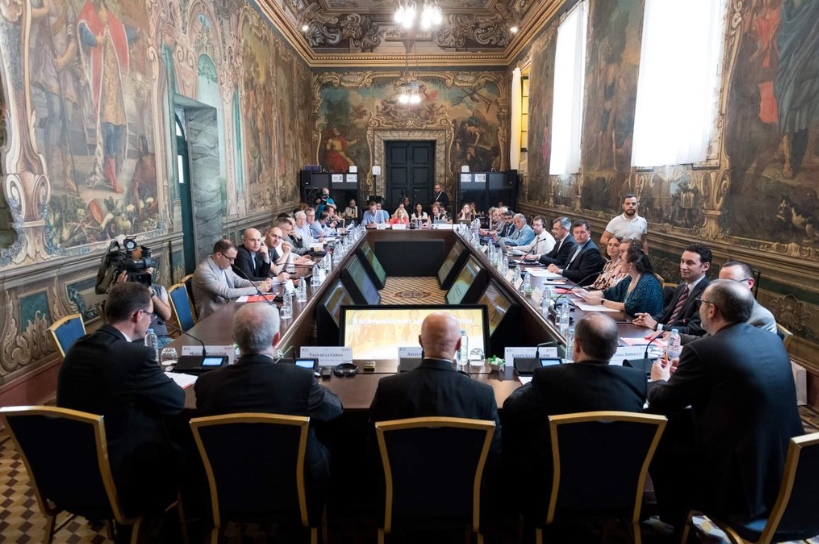 Archbishop Charles Scicluna recounted a touching and powerful experience he had while visiting Chile at the behest of  Pope Francis. The Archbishop was addressing 53 spokespersons of the bishops’ conferences of 27 different European countries during their annual meeting which this year was held  at the Curia, Floriana.

“Where was God when I was being abused?”, a victim asked the Archbishop during his mission in Chile. He described his meetings with abuse victims as very intense but as a positive stimulus for reflection. Scicluna, deeply touched, answered the man who asked him: “God was being abused in you.”

“Those who are abused”, said the Archbishop, “go through their own Calvary. For them the experience of abuse is a Via Crucis as the abuse causes a deep wound.”

Scicluna was sent on several missions by the Pope in the Church’s unstinting efforts to eradicate abuse. Victims always spoke very highly of the Archbishop’s empathy and support during such meetings. One victim even said that the Archbishop cried with the victims.

The Archbishop said that meeting victims is the only possible way to help the Church understand the victims and give an adequate response.

Before his recent visit to Poland, Scicluna told Newsbook.com.mt that he was shocked when he watched the movie “Tell no one” which documented the abuse of Polish minors by members of the Catholic Church in Poland.

“Communicate not cover up”

The theme of the  meeting of the media officers and spokespersons of the Bishops Conferences in Europe was ‘Crisis management and communication. It was dominated by discussions about how the Church is tackling the problem in different countries.

In his speech to the delegates the Archbishop discussed the May document penned by the Pope outlining new norms for the whole Church against those who abuse or cover up. The document, technically called a motu proprio ensures that Bishops and Religious Superiors are held accountable for their actions.

Scicluna, who is believed to contributed substantially to the writing of the document, emphasised  the duty for clerics and religious to report abuse.

“Communicate not cover up. Listen to and protect the abused while you denounce the abuser” said Scicluna about this document. He emphasised that the Pope wants the Church to move away from the culture of omerta’ to a culture of denunciation of what is bad and reparation to those who suffered.

The meeting of the spokespersons for European bishops started Monday at the Archbishop’s Curia and ends today. The organisation was in the hands of Curia Communications team led by Kevin Papagiourcopulo.