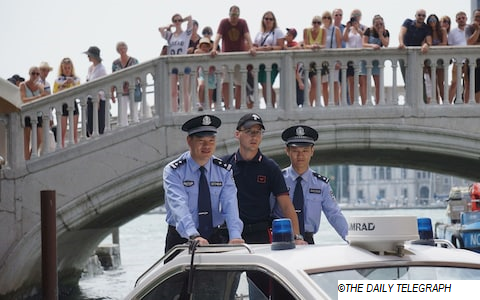 Venice has long been a melting pot of nationalities given its historical location as an entrepot. Seven hundred years after Marco Polo, himself a Venetian set out for Cathay and brought back with him silk and pasta, his hometown invited Chinese police officers to help in the surveillance of the city’s winding canals and alleyways.

For the past two weeks, two Chinese police officers – one from Shanghai, the other from Beijing – have been conducting joint patrols in the lagoon city with their Italian counterparts.

Uniformed but unarmed, the unusual sight of officers from the PRC attracted crowds of selfie-snapping tourists when they appeared in St Mark’s Square and on a police launch on the Grand Canal.

The idea is that they will assist the growing number of Chinese tourists who descend on Venice, whose lack of Italian or English means they are often open to being ripped off.