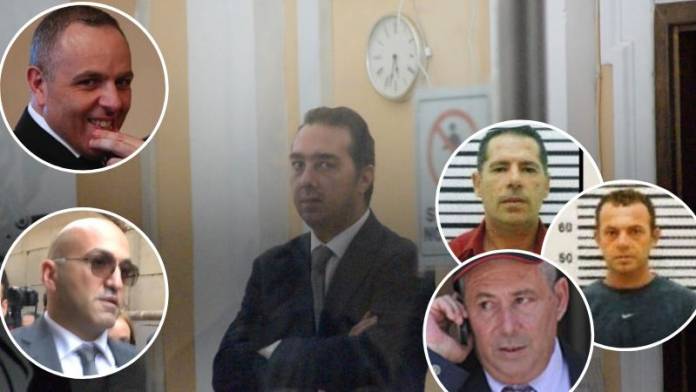 Self-confessed middleman Melvin Theuma said that ‘ix-xiħ’* in one of the recordings played in court during Thursday’s sitting, referred to Prime Minister Joseph Muscat.

According to the recording of a phone call which took place on 14 March 2019, Melvin Theuma used ‘ix-xiħ’ during the conversation. Under cross-examination by lawyer Jason Azzopardi who is appearing for the family, Theuma was asked whether he had used ‘ix-xiħ’ and to whom he was referring.

Theuma said that he was referring to Prime Minister Joseph Muscat and that the context was the granting of bail to the Degiorgio brothers.

Ix-xiħ is derived from the Arabic ‘Sheikh’ indicating a senior person.

Theuma was asked whether he was aware that former OPM Chief of Staff Keith Schembri had forked out €75,000 and passed the money on to Yorgen Fenech in a Reebok bag. Theuma said he was not aware of such details. Dr Azzopardi was referring to a statement given by Yorgen Fenech during interrogation. Theuma denied any knowledge that this money was passed on to Fenech.

The message that triggered the bomb

During cross-examination, Theuma confirmed that Yorgen Fenech had told him the contents of the message that triggered the bomb some weeks after the assassination took place. Dr Azzopardi, who is appearing for the family, pointed out that until a month after the assassination, only the person who sent the message, the service provider and the Secret Service had this information. During the time he got to know about the message, no arrests had been made. The contents of the message were only divulged later in court.

‘Kenneth had promised me that they would get bail’

After Yorgen Fenech and Melvin Theuma argued, Johann Cremona, who works with Fenech, and a certain Kenneth who worked at Castille turned up outside Melvin Theuma’s house. While not asking Kenneth directly who had sent him, Melvin Theuma said that he later verified this with Yorgen Fenech, the latter saying that Keith Schembri had sent Kenneth. Feeling under pressure by the Degiorgios to ensure their release on bail, Theuma had asked Kenneth about their bail. A phone call took place, after which Kenneth informed Theuma that the three men would be released on bail and would be given a €1 million each in a sports bag. Theuma asked Kenneth twice if he should inform Mario Degiorgio about it, with Kenneth telling him yes.

During Theuma’s testimonies it transpired that he had been under pressure from the Degiorgio brothers about their bail request. Fenech had told Theuma that he would not carry the responsibility of guaranteeing bail for the Degiorgios or even the €1 million each because he did not order it.

When it was reported that Daphne’s laptop was to be brought from Germany to Malta. Theuma had asked Fenech if this was good or bad news. Fenech had told him that it was good news; since she wrote about a lot of people, there would be a lot of information. Theuma said that Fenech had told him that the investigators would certainly not have any clue to who was behind it.

Under cross-examination, Dr Azzopardi pointed out that time he was told about the laptop coincided with the time that banners were placed around Malta asking for Daphne’s laptop. At around the same time, Cabinet was discussing whether to grant a Presidential pardon to one of the suspected hitmen, Vincent Muscat (il-Koħħu).

He did not apply for the job

Theuma said that he never applied for the job he got at the ministry. He explained that he had immediately told them that he was a taxi-driver and would not give up his work and would not be able to go to his job. Theuma said that his interview lasted some five minutes where he was asked if he could send an email. He had met with Tony Muscat, a day after the meeting with Keith Schembri and Sandro Craus took place.

He was called for a meeting at Castille a few days after Fenech allegedly told him to contract Caruana Galizia’s killing. He started working at the ministry on the 1st May 2017 or the day the snap election was called.

‘I knew I would be arrested’

Under cross-examination, Theuma said that he knew he would be arrested. He could not recall exactly who told him, but it was possibly Johann Cremona who did.

Melvin Theuma was granted a Presidential pardon in exchange of information. Prime Minister Joseph Muscat advised President Vella on Theuma’s pardon. During his testimony on Thursday, repeatedly said that what he was saying, he was testifying under oath and therefore could not lie. At one point, Theuma asked Azzopardi if he implied that he was lying, saying that he had to say the truth as there was his Presidential pardon at stake.