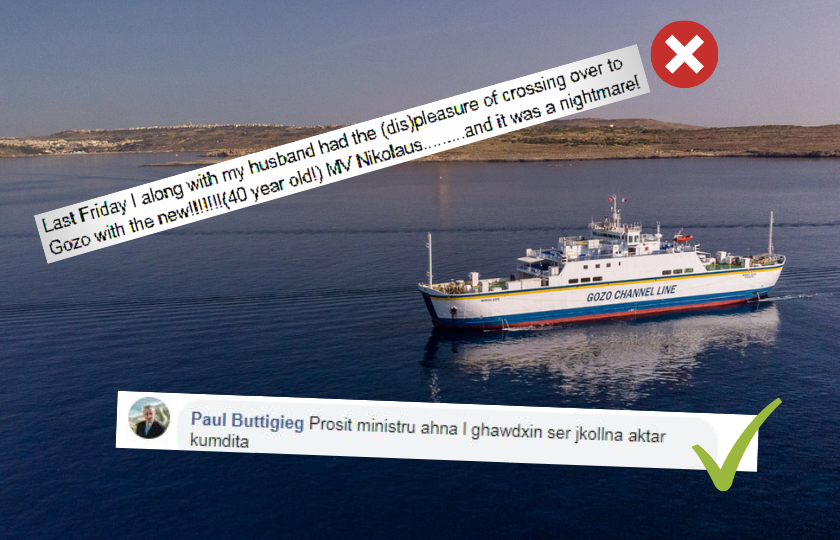 One of Gozo’s biggest accessibility projects recently has been the hiring of the Nikolaos ferry to support Gozo Channel’s three existing ferries.

Although this fourth ship officially starts work today, on the 13th June the Minister for Gozo Justyne Caruana said that the company had decided to start using to vessel early to meet the demands. She said the difference has been felt “immediately”.

However, several people have gone to social media to ask questions about the ship. There are those who have nothing but praise, while others raised their concerns about its deficiencies.

On Facebook someone asked why the new ferry was announced shortly before the election when the government was fully aware in advance that the ferry was still being painted in Gozo Channel’s colours. It has been said that these are things that happen when engaging politicians and elections. Someone else said that then with his reasoning, the government should stop its work when approaching election. Another man raised the question about why they were renting a 32 year old ship. One of the moderators of the discussion told the group that if the comments would no longer remain civilized, the whole discussion would be removed from the internet.

When the Minister Caruana announced that Nikolaos would be operational earlier than originally planned, the elected Mayor of Qala Paul Buttigieg, expressed his support saying that it would be more comfortable for Gozo. The overwhelming majority of the comments on the post were positive.

Writing on Facebook on the day of the ship’s arrival at Ċirkewwa, Caruana said that a single ship journey could carry a whole marshalling area of cars from either Ċirkewwa or Mġarr in Gozo. Again Qala mayor Paul Buttigieg commented saying that this will make the journey easier. Other comments of praise said that this would now mean there was less of a need for a tunnel between the two islands. Someone else asked if the ship would be going to Valletta.

Among other social media comments are attacks on those who have criticised the ferry. They were told that whoever does not like the service does not have use it.

A further commenter stated that her daughter had used the ship and that the service was good. However, she raised concern about the number of stairs and that there was no lift. She also said that the ship will take longer to roll-on and roll-off cars since the ramp is only suitable for only one car at any time. However, this situation affects more of the car’s landing because usually cars can unload in pairs on the other ferries. Another person bluntly said that people should really feel grateful.

Another commenter said they had a completely different experience. 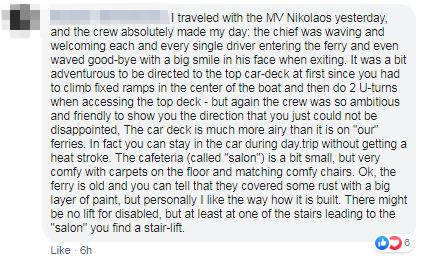 She said the trip was a disaster. There was a lot of noise from engines and the passenger level was inaccessible for wheelchair users. Responding to the comment, the Commissioner for the National Council for Persons with Disabilities Oliver Scicluna, said that he would be investigating the situation because access was otherwise promised. He added that he had received photos of the stair-lift. The commenter said that this is not an issue of who is right but rather about ensuring that public transport is accessible to everyone. Another person criticized those who were responsible for ensuring accessibility on the vessel should be ashamed.

All of the comments:

Updated: The fourth Gozo ferry could arrive in Malta on Monday

When Nikolaos arrived in Ċirkewwa for the first time, Caruana said that instead of two ships, the new summer schedule Gozo Channel will be operating three ships while the fourth vessel would be dedicated to commercial vehicles.

When asked how the ship was being integrated into the service Chairperson Gozo Channel Joe Cordina told Newsbook.com.mt that all four ships were operating on a shuttle schedule.

“I am just as capable” – athlete with hearing impairment