Julian, who has spastic diplegia, a form of cerebral palsy, has returned to Malta after undergoing surgery in America. 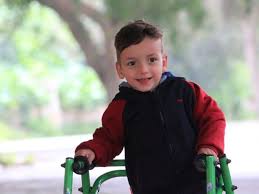 Together with his family, Julian had left over a month ago for the operation to remove spasticity in his legs, which may give him the chance to walk.

The exorbitant cost of the surgery, known as selective dorsal rhizotomy, was self-funded. However, the family was offered financial support by myriad other people who organised fundraisers independently.

Cerebral palsy is a disorder that affects muscle tone, movement, and motor skills. It is normally caused by brain damage that happens before or during a baby’s birth.

Watch this space for an exclusive interview with a very brave person who went to great lengths to raise funds for Julian… coming soon.

Watch: “I did it!” Jeanesse Abela, who has cerebral palsy, manages to walk

An Uphill Climb for a very Good Cause