Rule of law NGO Repubblika said that it would be suspicious of PL and PN arrangements behind closed doors regarding the judicial appointment reforms.

In a letter sent to the President of the Venice Commission Gianni Buquicchio Repubblika said that it was deeply concerned about the way the Maltese government was introducing reforms on judicial appointments.

“We are not reassured by the requirement of agreement of the opposition Nationalist Party as we would be suspicious of political arrangements behind closed doors concerning what is fundamentally a constitutional problem,” said Repubblika.

Repubblika said that it received a response from Justice Minister Edward Zammit Lewis that appears to state that the NGO would only be able to review the amendments after the Venice Commission’s approval. The NGO believes that by that point, the Government and Opposition would proceed to adopt the amendments without reference to any input it may have on the matter.

Repubblika asked the commission to ensure that the constitutional reforms be open to substantive participation of civil society.

Earlier this month, Repubblika had expressed its satisfaction that before proposing amendments in Parliament on the appointment of members of the judiciary, the Government intends to obtain a formal agreement in writing from the Venice Commission. 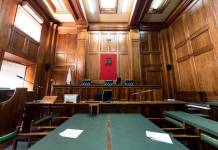 You can read Repubblika’s letter here: