Partit Laburista leader Robert Abela who is currently attending the EU summit said that as things stand, Malta will manage to secure a fair agreement on the funds to be allocated to the country.

Speaking during a radio interview on the party’s media on Sunday, Abela used the ten minute interview to speak about the intensive negotiations during the first face-to-face EU summit since spring lockdowns across the continent.

European Union leaders failed to agree on a massive stimulus fund to revive their coronavirus-hammered economies on Saturday after two days of fraught negotiations, but extended their summit for another day to try and overcome their differences.

On Sunday, Abela explained that while the discussions in general were stalled, the situation was looking good for Malta.

Rule of law as a condition for EU money

Discussions over the weekend degenerated due to the fact that the recovery fund will come with ‘conditionality’. The unprecedented economic stimulus to recover from the coronavirus pandemic will come with certain conditions, among which is the rule of law.

Abela said that Malta was at the forefront of the discussions pushing for the strengthening of European values. He maintained that while in the past such condition might have placed Malta at a disadvantage, recent changes and reforms have placed the country in a better position to be able to speak on the matter.

Other issues relating to the recovery fund mentioned by Abela include governance, the issue of grants versus debits, the allocation of funds over the next three years, among others.

Abela stressed that the EU leaders need to find a solution and move forward, noting that both the Multi-annual Financial Framework and the recovery fund could not wait any longer. However, he observed that it was improbable that the EU leaders would come to an agreement on Sunday.

Speaking about the recovery fund criteria, Abela explained that one of the main criteria was the unemployment rate between the period 2015-2019. Malta decreased its unemployment rates during that period with Abela noting that the country was at a disadvantage.

He mentioned that during the plenary, he suggested a different set of criteria for the allocation of funds.

Prime Minister Abela claimed that Malta should not be ‘penalised’ for its success, adding that Malta is set to recover from the pandemic in 2021 according to the EU’s projections. 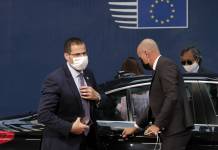