On Facebook, the MPA said that while it is satisfied with the Minister for National Security Michael Farrugia’s statement to make some changes to the anomaly of the senior body of the Force, it is disappointed the MPA was not consulted, as it was the MPA itself who brought the anomaly to light.

On the occasion of the awards ceremony 2019, Minister Farrugia said that the anomaly will be adjusted for in the coming weeks. The Association interpreted this to be a reference to the wages of the Commissioner, the Deputy Commissioner, and Assistant Commissioners.

The MPA stressed that it has been putting pressure on the Government to fix the anomaly for months, but the Minister did not consult with them. It concluded that “this adjustment was probably made after continuous pressure exerted by the MPA.”

Police have always been the root of the problem – Giegold 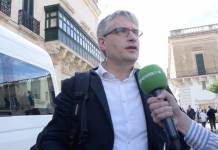 John Paul Cordina   September 30, 2020
The majority of eligible voters in the Nationalist Party’s leadership election have already voted, with the 50% mark being surpassed on the third day of early voting organised by the party.