Archbishop Charles Scicluna claimed that we should confront Malta’s current difficult times bravely. He said this to the Prime Minister while exchanging seasons greetings together with the Labour Parliamentary Group. This exchange took place in the Valletta Palace of the Archbishop where the Auxiliary Bishop Joseph Galea Curmi was also present.

The Archbishop said that politicians should work hard not only to ensure a better life for the generations to come but also to promote moral and ethical qualities. He explained that this current challenge is not an easy one. In spite of this, we should be in touch with reality because it is only by owning the truth that we can look forward to what awaits us.

The Prime Minister thanked the Archbishop for the cooperation he showed him throughout the years that he spent serving as a Prime Minister. Muscat also expressed his wish that such cooperation between the Church and the State would ensue.

The Archbishop said that today a further agreement was signed between Corradino Corrective Facility and Caritas where prisoners with a drug addiction follow courses organised by Caritas. He further explained that this is the Church’s way of providing a concrete contribution to society.

The Archbishop called for doing away with any forms of hate and anger, especially in moments like these where man would be faced with a dilemma between the forces of good and evil. Dealing with this dilemma is a challenge which man must face in order to live in the best possible way.

Addressing Ministers and Labour Members of Parliament, the Archbishop called for their concrete upholding of solidarity and humanity.

Later on, the Archbishop met with the Speaker of the House Anġlu Farrugia, together with members of the Judiciary and with the Opposition Leader Adrian Delia. 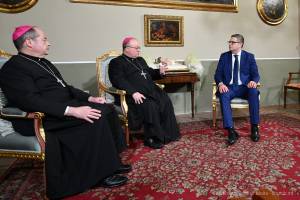 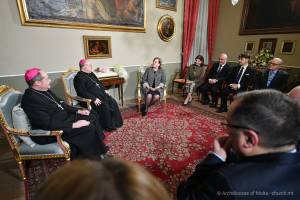