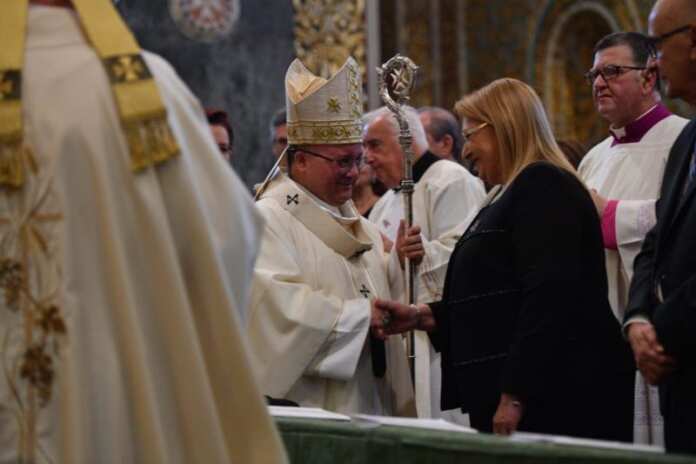 The need for the prophetic voice of solidarity particularly today when many “seem to ascribe more value to the individual and national interest over the common interest of the family of nations” was the theme of the homily of Archbishop Scicluna this morning. The Archbishop was celebrating Mass at St. John’s Co-cathedral on the occasion of Independence Day which was attended by the President Marie Louise Coleiro-Preca, Prime Minister Joseph Muscat, Opposition leader Adrian Delia as well as various ministers and parliamentary representatives from government and the opposition.

Archbishop Scicluna’s parting shot was the appropriateness of celebrating Independence Day which he described as “a longstanding dream that came true at the end of a long and winding road.” While independence indicates the exercise of the power and autonomous jurisdiction of statehood, he said it also means that states are interdependent. The disastrous two World Wars helped the founding fathers of the European Union realise that “that peace will flourish through solidarity between nations” while “if every nation goes it alone, it would only lead to reciprocal destruction”.

Solidarity between different states and peoples

It is right for the Maltese government, he said, to appeal for solidarity between EU states in order to find an adequate and efficient response to the phenomenon of immigration as  “when a burden is shared it becomes lighter to carry”. On the other hand a crisis in solidarity, he affirmed, would shake the very foundations on which the European Union is built. Those who need our solidarity, he continued, are people who are fleeing a cruel environment, a violent contempt of the dignity of the human person, a harsh fate of slavery, even torture and death.

Solidarity within the state

According to the Archbishop, solidarity within Maltese society is expressed in the social policies that the Maltese State has embraced from prior to Independence to this day. Another example of solidarity he mentioned is the State’s commitment to help social partners that promote social action including  the Church, which is a pioneer in many fields of social and charitable action, and several other groups. Today, he said, new expressions of solidarity have to be found for the new types of poverty.

Towards the end of his homily, the Archbishop emphasised the urgent need for solidarity with future generations as we have to consider not only the  immediate impact of our decisions but also their consequences on the quality of life of the future generations. He mentioned as examples decisions that have an impact on the environmental heritage as well  as on the cultural, historical, architectural and archeological legacy of Malta.