The Mayor of San Lawrenz, Noel Formosa has told Newsbook.com.mt that the focus should be on improving the management of Dwejra as a tourist attraction before an artificial Azure Window can even be considered.

Mr Formosa explains that the lack of management at Dwejra, specifically around its car-parking facilities, is ‘disorganised’ and ‘something visible’.

‘If you arrive at the parking area in Dwejra to find a disorganised parking area, it takes you back.’, he explained. Instead he believes that the, ‘government, local council and NGOs should come and think seriously’ about developing better management of the area and its facilities.

Thinking and acting on ‘better management’, should done before ‘we have major projects like an artificial Azure Window’, he said.

The Mayor is referring to the announcement by a Russian architect and interior designer’s vision for a future Azure Window, one aimed at being as much a marvel as the geological structure once was. 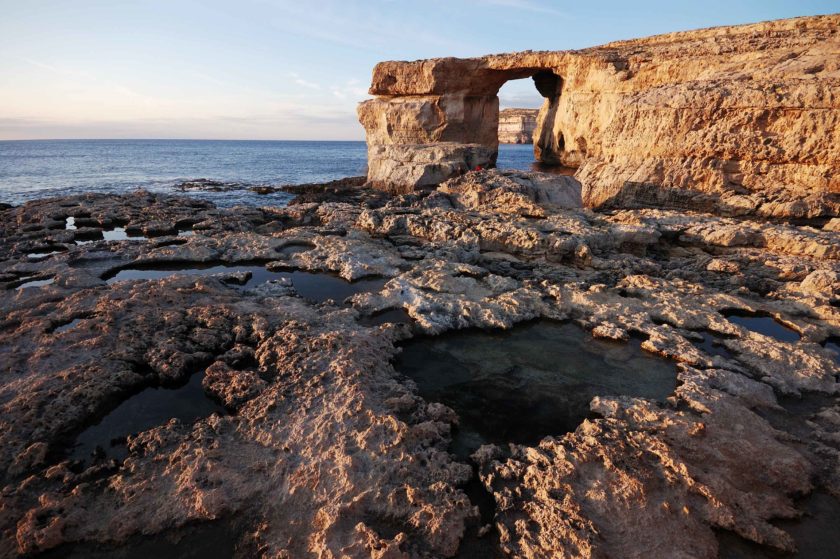 ‘The idea came to me 6 months after it collapsed’

The Azure Window fell into the sea in March 2017 and not long after, it soon became seen as the loss of a national treasure.

Watching the news unfold was Svetozar Andreev, head of the architectural firm HoteiRussia, based on St Petersburg.

Andreev had been visiting the Maltese islands and specifically the Azure Window over the last decade, photographing it as it was shaped by the sea.

When the Window fell, Andreev was inspired to design something to replace it.

He says his ‘new’ Azure Window design would, ‘serve as a memorial’ to the original ‘and at the same time become a significant architectural feature with immaculate compositional integrity. The resultant form may be ultra-modern, but it is nonetheless wholly dedicated to historical memory.’, taking the,  ‘form and outline’ of the original.

‘The Heart of Malta’

‘The Heart of Malta’ imagines a polygonal architectural structure covered in mirrored steel faces which the creator says will have the same proportions as the original limestone arch and ‘will blend into the landscape’.  Internally, the structure will be complete with 5,000 square metres of artistic space set across five-floors spiral exhibition space.  Andreev says each step in the spiral step will represent one thousand years of Maltese history.

It will be a ‘perfect monument and symbol of the fusion of modernity and nature, of time and history, and a testament to the tenacity of the human spirit.’, the designer says.

‘It’s nice, but there are some many questions’

Along with more pressing issues for Dwejra, Mayor Formosa does think the design of the ‘The Heart of Malta’ is nice. But it leaves him with questions.

Will it fit in with the landscape? The idea of building a structure that is made from metal sat among an area that is naturally formed seems, ‘out of place’ to him.

What about the environment around it? He also worries that the structure could have an impact on the surrounding environmnent. ‘You have to look at the damage it could cause for the seabed’, he says. For an environment that is naturally formed and naturally decayed, he says, ‘what we need to do is preserve what we have.’.

Good for tourism? Formosa says that Dwejra is one of the key attractions in Gozo which brings tourists flocking, but a new structure like this needs to be assessed and studied to understand its longer term impact, not just its value.

‘The environment is everything down here’

The Mayor’s comments are shared by the manager of the Azure Window Restaurant, Godwin Cassar.

He’s been serving customers for the past 7 years and says that he’s sceptical that a project like this could deal with the same ferocious elements the original Azure Window endured.

‘I don’t know how it will be possible, because the environment and how it is. When there’s heavy winds, the nature of the sea, the big swells here affect the area here. The sea can even come up to the square even when its windy.  The enviornment is everything down here. We have to take care the environment. That’s why its an attraction, because of the enviornment as it is down here. There are a lot of natural attractions down here, a lot of spots which are important to preserve.

Cassar says that he thinks it will take a series of geological studies and architects to find a way to construct the building so that has the best impact on the environment.

The structure proposed for the ‘Heart of Malta’ would in this case, be built out of ecological materials, the same used in shipbuilding and architecture, and this will be designed both to withstand the elements and ‘also prevent any negative environmental impact’.

‘We have designed our project in such a way that nature lives, changes and is reflected in its facets and aspects, and becomes an integral part of it. What better metaphor could there be for the nature of human existence?’, he said.

‘Dwejra is not just the Azure Window’

Although the Azure Window is a key feature of the Dwejra area, it is not the only part of significance to the area.

Mayor Formosa says that promoting the understanding that Dwejra is home to sinkholes, a divable seabed, a geological hotspot, and that all of these things need to preserved, what is needed good management of the area and its attractions.

In his opinion, fixing the carpark should come first.