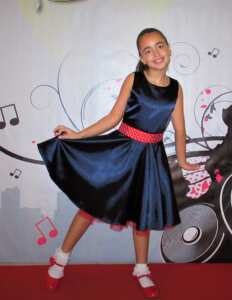 Eight-year-old singer Shaznay Mangion has only been singing for a couple of years but she is already taking the music scene by storm.

Shaznay, who hails from Mosta, has won awards both in Malta and overseas, including first place in the Stars of the Albion competition in London earlier this year, She also placed first place with her original song ‘Ajjut’ in the local festival Melodija Maġika and was second runner-up in Sanremo Junior Malta 2019.