‘Let’s Chat’ sees Coryse Borg having a light-hearted video chat with number of personalities in their own homes.

In this episode she has a chat with Mark Grenside. Originally from London, Mark has been living in Malta for the past four and a half years. He has had a long and varied career that took him from insurance to film and TV production to music management and entrepreneurship.

He has also recently moved into writing, with the publication of a thriller set in Hollywood called Fall Out which centres around an LA screenwriter who is killed shortly after completing his latest script.

Mark has worked with some of the greatest names in the television and film business, including master puppeteer/filmmaker Jim Henson of The Muppets fame, and he once mistook a very famous film producer for a chauffeur, with hilarious consequences. Want to know who it was? Check out the video above! 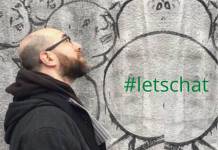 Watch: “Watching theatre from home has been one Covid advantage” – Jayne Giordanella #letschat