The Captain of the merchant vessel Talia is appealing for the Maltese authorities to allow them to disembark, after rescuing over 50 persons from a small boat during their voyage from Libya to Spain.

In footage acquired by Newsbook.com.mt from Alarm Phone, the Captain can be seen explaining that after leaving shore, they were alerted of a small boat with 52 persons needing assistance. He continues to say that they were in desperate condition. This ship headed to Lampedusa, where they found a closed border from the Italian authorities. It was then that they contacted Maltese authorities to ask for permission to enter Maltese waters. 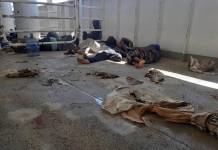 The Captain stated that Malta’s RCC allowed them to proceed; however, upon arrival, they were not allowed to enter. Due to a storm, the migrants were relocated to deck six, where usually livestock are held during transportation. After being alerted of the storm, Maltese authorities allowed them to anchor in territorial waters.

The Captain is seeking help from the Maltese as they are in a desperate situation since their supplies are running out. “We need help…no more food, no more water.” 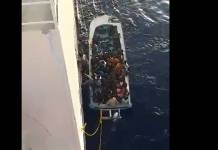 In an email sent by RCC Malta on Monday at 7.00pm, it advised that the migrants suffering from headaches “should be given 2 tabs paracetamol every 6 hours until the headache resolves. In the meantime, increased water intake should be encouraged.” It added that if it worsens over the next 12 hours despite following the above instructions, a request with all ailments is kindly requested to the best of your ability. Malta’s RCC remarked that if deemed necessary, a nursing officer or medical officer (according to the ailments listed) shall be dispatched to review the case.

Additionally, Maltese authorities also requested to know if there are any children (younger than 14 years old), any pregnant women and any elderly (>65yrs old).