Construction employees who have gone unpaid for months have been threatened with eviction, Newsbook.com.mt has learnt. One of the employees got in touch telling this newsroom that their employer was claiming that they have been paid, however, they have received no money. The workers are now being threatened with eviction from their hotel and have launched an appeal to the Maltese government to intervene.

Newsbook.com.mt visited the construction workers employed to work on the Fortina project and they have have spoken out about their woes on Wednesday morning.

Construction workers claim they have not been paid for months 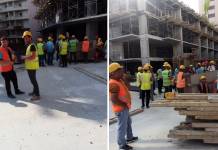 The construction workers, a group of 80 employees from Turkey who do not speak English, have been here for a number of months. They have appealed for the Maltese government to intervene as they are at a loss what to do next. Some say they have not received their wages for three months while others say they have gone unpaid for five months. They recounted how they had no money to send back home to their families for Eid which is celebrated once Ramadan ends.

The workers have been striking for 13 days now. One of those affected noted how no one has taken interest in their plight. They all highlighted that, although their hotel was being paid for by their employer, they had no money to buy cigarettes.

The construction workers told Newsbook.com.mt that they would start working at 7.00 am and finish at 6.00 pm. However, they would sometimes work until late at night before they would be stopped by the police.

Fortina investments distances itself from TACA

Fortina investment issued a statement distancing itself from TACA construction. In its statement, the company said that the employees in questions were employed with the Turkish company and not Fortina.

“Fortina Contracting Ltd, a fully owned subsidiary of Fortina Investments, has honoured and is in line with all its financial obligations to Taca Construction for the approved civil works undertaken on the development to date, and is very disappointed that the Turkish company has allegedly not paid its workers the wages that are due to them,” the statement reads.

It added that the situation was being treated as serious and that everything was being done to ensure that their rights are safeguarded.

Disclaimer: The dialogue in the video is approximated and not a word for word translation