Nowadays Luke Magri is helping others through Caritas Malta, in the same way the organisation helped him overcome drug abuse, which he battled against for nine long years.

During an interview on 103 Morning Show, Luke explained that ten years had passed since he had stopped taking drugs and entered rehabilitation. He is now clean and through the rehab program offered by Caritas he managed to overcome drug addiction.

He referred to a slogan used by Caritas in its campaign for 2015 “il-Caritas għenet lili nieqaf u lil uliedek ma jibdewx”. He noted that the slogan reflected the reality since through its work Caritas within the community, it prevented many from falling victim to drug abuse. Ten years after he went through rehabilitation, Magri is nowadays working with Caritas and giving back to society by sharing his experience and lessons learnt.

“I’ve become a man,” Luke told listeners while explaining his story which he shares to help others.

Four years ago, Luke had described his experience as a very bad one and having been left with three choices: end up in prison, in the grave or live. He chose to live. Speaking to Newsbook.com.mt, Luke had underlined how he did not have a relationship with himself.

Luke observed that while victims of drug abuse are less stigmatized nowadays, more work needs to be done.

Caritas will organise a fundraising telethon this weekend aimed at raising funds to continue its work within society. During the same telethon, Caritas will have its own helpline for those individuals seeking help.

The telethon, “Maratona ta’ mħabba bil-qalb kollha,” will be broadcast on all TV stations. It will kick off at noon. 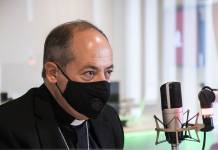 Watch: The home which gives the homeless a future