A video taken by one of our readers at the site in Qrendi shows trucks tipping construction waste illegally in broad daylight when they could go to tip it legally in nearby Mqabba. The only snag is that they would have to wait in a queue. So, why wait in a queue, Jack, when you can take the law into your own hands.

The land in question was, according to our sources, a former quarry which was infilled with inert waste, another name for construction waste. This is, if permitted, a very logical change of use. However, the former quarry is now full to overflowing. This concern has been raised over a number of months and other media have also followed up the matter. 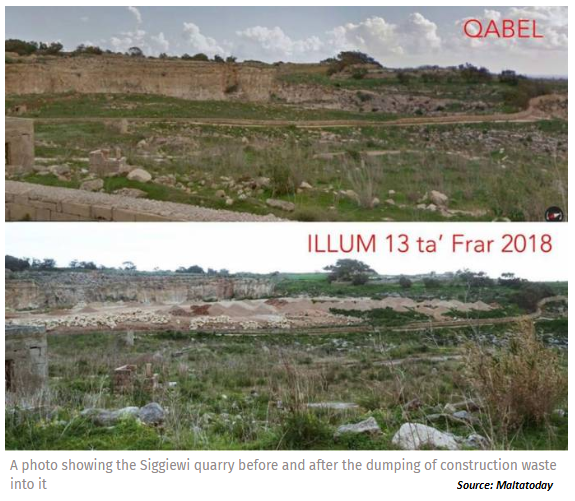 In February, Malta Today gave a ‘before and after’ picture with the quarry filled to the brim. In June, pictures taken by residents show that the dumping had gone one level up. By October, The Malta Independent reported an incessant line of trucks still dumping construction waste. At that point it was two tiers up and had reached over 17m in height. Now, this latter-day Tower of Babel has reached the third tier.

The site is hit by PA enforcement and has a daily fine accruing at €100. However, it has now exceeded the sum of €50,000. Therein lies the reason for the continued dumping. In PQ 7425 tabled by PD MP Godfrey Farrugia, Minister Ian Borg had given details of the daily fine and that it currently

(23.10.2018) stood in excess of €100,000. However, the law may provide capping for such fines, so, while nominally, the owner of this land has a daily fine running, he will never pay the real cost as, for him, the fine-clock stopped ticking a while ago.

Meanwhile, the dumping goes on unabated.