The Good Friday procession of Vittoriosa, which since 1974 has taken the form of a pageant, consists mainly of eight traditional statues carried by ‘fratelli’ who are brothers (members) of religious groups. Laymen dressed in the robes of the various biblical characters of the old and new Testaments also take part in this procession. 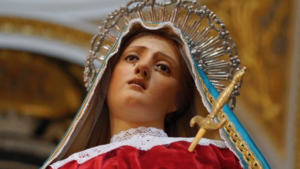 The origin of this manifestation is not exactly known, but it is traditionally held that in the early years of the 18th century, Maltese sailors watching Good Friday processions in Spain, were so impressed with the splendour of the statues that they eventually brought over a set of statues to their homeland.

Unlike the statues found in other parishes, which are made only of wood or papier-mâché, the Vittoriosa ones are also richly dressed in coloured velvet and silk and embroidered in gold thread. These vestments give the statues a lifelike quality akin to that of the biblical characters taking part in the Procession. In this way, a more vivid and realistic impression is created. These statues are on view throughout the year in the Crucifix Oratory close to the Parish Church.

The procession on Good Friday makes its way through the narrow and historic streets of the city at around 5.00 pm. The procession involves around 200 people all performing various roles within a pageant commemorating the passion and death of Jesus Christ.