Bishop Mario Grech highlighted the importance of a Church that reforms itself in his last homily in Gozo ahead of his move to the Vatican, arguing that it was through change that it could remain faithful to God.

A thanksgiving mass in honour of Bishop Grech was held at the Parish Church of St John the Baptist in Xewkija on Thursday evening, and in his homily, the Bishop chose to reflect on what it meant to be faithful, drawing inspiration from the gospel reading in which Jesus warned that one cannot know when the Lord will come.

“Does being faithful mean sticking to the status quo, remaining immobile like stagnant water,” he asked. “Or does it mean possessing the capacity to change yourself and to change things for the better? That one remains open to the surprises God may present?”

Bishop Grech did observe that it was important to cherish the Church’s legacy, but this was not enough.

He also referred to one of the scripture readings of the day, the appointment of the first seven deacons recounted in the Acts of the Apostles amid disagreements between Greek-speaking and Aramaic-speaking Jews. The Apostles, he highlighted exercised discernment and took the then-unprecedented step of appointing deacons.

“Were they not being faithful,” he asked. “Nowadays, they would be told that they were straying from the Gospel, straying from tradition, even creating a schism.”

Bishop Grech then highlighted a present controversy within the Church, the implementation of Pope Francis’ apostolic exhortation Amoris Laetitia, specifically its recommendation to exercise discernment when it came to divorced couples who have civilly remarried and who seek access to the sacraments.

As he concluded, he praised his successor, Bishop Anton Teuma, stating that he was convinced that he was faithful to both God and man, and that he had the required charisma to continue building on his efforts. He highlighted that he himself found a lot of ongoing processes he could build on when he was made Bishop of Gozo, thanks to the works of his own predecessor, the late Bishop Nikol Cauchi.

Bishop Grech was consecrated as the 8th Bishop of Gozo in 2006, stepping down last year after Pope Francis appointed him Pro-Secretary General of the Synod of Bishops. In that position, he will be assisting the Synod’s Secretary General, Cardinal Lorenzo Baldisseri, with the aim of succeeding him on his retirement.

He continued serving as Apostolic Administrator of Gozo until Bishop Teuma was consecrated last week. 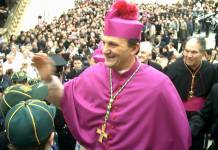