The 18th-century St Mary’s Battery in Comino, one of the heritage sites managed by Din l-Art Ħelwa, has been restored in a project primarily financed by EU funds.

The battery was built by the Knights of St John between 1715-16, facing the Marfa coast. Together with the Wied Musa Battery in Mellieħa – which was built at the same time, and which was extensively modified to become the Marfa Palace Hotel in the 19th century – it sought to protect the South Comino Channel. After no longer serving any military purpose, the battery had been inhabited for some time, but was abandoned yet again before being passed on to Din l-Art Ħelwa.

DLĦ volunteer Joseph Attard, who looks after the battery and the nearby 17th century St Mary’s Tower, said that the latest restoration works, which started early last year, had been sorely needed.

He added that he was pleased to note that the battery was now one of the finest extant batteries in the country, though expressed his hope for others in sore need of restoration would receive a similar treatment, specifically citing the Wied Musa Battery and the Qbajjar Battery as examples. 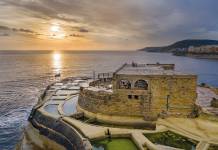 The restoration was inaugurated by Tourism Minister Julia Farrugia Portelli, who said that the battery was testament to a rich history that belied Comino’s small size.

She noted that almost a third of tourists who travelled to Malta last year visited Comino, a figure that exceeds 876,000, in addition to the thousands of Maltese residents who visited the island.