The celebrations in Valletta of the 45 anniversary of Republic Day were today marked by a large number of protestors shouting “Mafia! Mafia” together with a massive number of policemen. Several ranking officers, as well as rank and file policemen, were also observed in the crowds, mingling.

The official celebrations at Pjazza San Gorg played second fiddle to the noisier protests along Republic Street. Protestors behind police barricades carried posters and photos of assassinated journalist Daphne Caruana Galizia. The chanted “Mafia! Mafia!” and blew their whistles and horns in competition with the sound of the military band playing drums and brass instruments. The protestors are clamouring for good governance and justice for Daphne Caruana Galizia.

The protestors were advised by the organisers – Repubblika, Occupy Justice and Manueldelia.com – to stay behind the barricades. 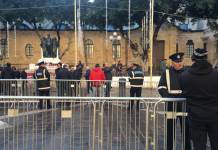 Police started lining up Republic Street by 7.00a.m. There was an extra heavy police presence outside the Office of the Prime Minister.

St George’s Square, where the official celebrations are being held, before the Investiture Ceremony which will be held inside the Palace,  was empty of people a few police officers and dignitaries.

Who were the 2019 Republic Day honorees?

Bartolo’s no to businessmen’s use of politics and criminals

Watch: ‘Muscat is an obstruction to justice’ – Delia

John Paul Cordina   January 22, 2020
The number of applicants for social housing is slightly higher than it had been seven years ago, reaching 2,920 this month.