The day was marked by numerous calls for a stop to mass events, but Prime Minister Robert Abela himself oversaw one on Monday night as he marked the completion of a €2 million embellishment of St Francis Square in Victoria. 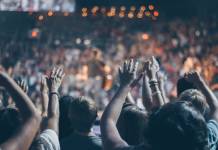 A sizeable crowd – and barely a face mask in sight – converged outside the Gozo Ministry on Monday evening as the government provided a night of entertainment to mark the completion of the project, which was inaugurated by Abela and Gozo Minister Clint Camilleri.

Apart from the traditional political speeches, the event included live music, a light show projected on the ministry building’s façade and even a fireworks display, with the crowd seated in chairs placed closely together.

The square sees considerable traffic as it links Victoria to various other Gozitan localities, and the project involved an increase in pedestrian zones, the installation of a new lighting system, the strengthening of the square’s water catchment systems and new street furniture.

Camilleri emphasised that the ministry worked tirelessly to finish the project in the shortest possible time, and emphasised that infrastructure did not simply concern roads, but also the regeneration of public squares as the centres of activity in every locality.

He also thanked Abela for attending the inauguration, noting that it was the Prime Minister’s first inauguration event in Gozo.

Monique Agius   September 15, 2020
During a visit to the Marsa incinerator, Environment Minister Aaron Farrugia explained the government's vision for the waste management infrastructure and announced that €50 million will be invested in building the thermal treatment facility.