Sabli Junior, a young man from Sudan, has taught himself how to shoot videos, edit and produce content for his YouTube channel. Newsbook.com.mt sat down with Sabli Junior, to talk about his dreams and work.

He has a YouTube channel where he regularly posts videos in Arabic. He plans to have some videos in English too in the near future. He also designs t-shirts to fund his studies.

Sabli Junior came on board a boat along with some other 60 asylum seekers in summer in 2019. They were rescued by the Armed Forces of Malta. He spent a total of five months and 20 days in detention, living day by day until he was released into the community. Sabli Junior was living in Ħal Far when the residents were placed under mandatory quarantine after some residents tested positive during the early months of the coronavirus pandemic in Malta. He is now living in the community, working and hoping to continue pursuing his studies.

The youth spent two years in Libya before he came to Malta. He described life in the war-torn country as tough, referring to the instability and the constant fear one feels in Libya.

Reflecting on his time in detention, Sabli Junior noted that no language classes were offered to the asylum seekers. He remarked that upon being freed, he found non-governmental organisations such as Integra Foundation and Blue Door English which have helped him. When he first came, he spoke no English. He is now focusing on becoming fluent in the language as he plans to attend college in October.

“If a country doesn’t have free media, then it is a dead country”

Sabli Jr produces his own videos which he shoots using his phone and edits on his computer. Versed in various software which he learnt to navigate through online tutorials, he aspires to become a videographer. In the meantime, he makes videos to raise awareness about the situation in Sudan and bring attention to the problems.

Having been through such situations, Sabli Jr was asked about the importance of media freedom, to which he flatly replied that a country without media freedom is a “dead” country. Citizens depend on media and the press for information. If the government holds total control over the information, it would decide which content or not, the citizens can view.

Sabli Jr noted that during the revolution of Sudan which led to the ousting of Bashir, the media which was owned by the state, did not cover the events. It also resorted to lying about the situation. The younger generation, however, found a way around the situation. Digital media helped youths circumvent government censorship.

Sabli Jr had a job prior to the coronavirus outbreak in Malta. When mandatory quarantine was imposed on Ħal Far residents, he lost his job and has not found one since.

“The situation in Malta has become more tough,” he observed, saying that once mandatory quarantine was lifted he had lost his job as he experienced huge difficulties.

This, however, did not dishearten him, noting that many have moved online, he quickly took the opportunity to start designing t-shirts. After some research, he noted that there were online website providing a full service from printing to delivery.

The different t-shirt designs which are available through his online shop, help Sabli Jr to raise funds to continue his studies in Malta.

Among his sources of inspiration, the need to provide education for all children and women’s rights, inspire Sabli Jr. Speaking to this newsroom, Sabli Jr noted how education matters stressing that it is vital for every child to receive education.

“Education is so important for every child in this world,” he said.

Speaking about women’s rights, the young videographer said that he felt that women should be supported. He referred to the situation in Sudan, noting that women do not have rights. Sabli Jr observed that while women were contributing heavily to their societies, their work was not appreciated.

Sabli Jr aspires to become a journalist and work in the media after graduating from MCAST.

“Malta has become my new home,” he concluded, thanking the community for welcoming him. He remarked that when he comes across racist comments online, the person making such comments only represents themselves. 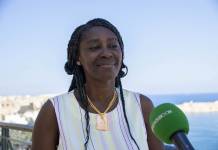