An adoptive family had to wait nine months before hugging their newly adopted child due to the global coronavirus pandemic.

Sathvika was welcomed at the Malta International Airport on Wednesday afternoon.

The girl was adopted from India by Angie and Kevin Farrugia.

Newsbook.com.mt had earlier reported an interview with another couple who were caught in India while in the country to meet their adoptive daughter when the authorities imposed a strict lockdown on the country.

Watch: Stranded in India; “She’s the missing piece in our family jigsaw puzzle” 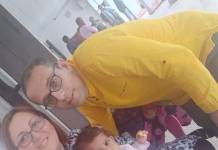 Similarly, the Farrugias had to wait nine long months before they could hug their daughter. On Wednesday, reporters and relatives welcomed Sathvika who is finally in Malta.

Speaking to Newsbook.com.mt, Angie explained that when the time had finally come to go and meet their daughter in India, she fell ill. Instead Angie’s husband and her sister travelled to the South Asian country to meet Sathvika. Angie highlighted that she would not wish the unpleasant and uncertain experience unto anyone.

Angie’s sister Monica Said and Kevin traveled to India on 10 November. They met Sathvika the next day. While in India, they celebrated the Hindu festival of lights better known as Diwali. The family also met with Malta’s High Commissioner in India, Reuben Gauci and his wife.

While waiting for their return, Angie prepared a video which she published on her Facebook profile.

“Your Gotcha Day Sathvika, I might be miles away princess but you were in my heart right from the very 1st little picture I saw of you,” Angie wrote in the caption accompanying the video.

Kevin Farrugia told reporters waiting for their return, that their life has now been fulfilled. Angie Farrugia explained that the matching process had began in April 2019 and the family had to meet Sathvika in March. “But coronavirus had other plans,” she remarked, adding that on the bright side, Sathvika was in Malta just in time for Christmas where they can spend it as a family.

Angie encouraged prospective adoptive parents and told them not to give up, acknowledging that the process is not easy, the result gives one great satisfaction.

On 22 October, Aġenzija Tama announced that families who were awaiting to meet their adoptive children in India, will be given a travel visa.

Are you waiting to meet your adoptive child?