Posted by Repubblika on Wednesday, September 16, 2020

Cardboard cut-outs depicting each member of cabinet as one of the proverbial wise monkeys – that see, hear and speak no evil – adorned the steps of Castille in a protest held by NGO Repubblika on Wednesday, marking 35 months since the assassination of Daphne Caruana Galizia.

In a statement issued on the occasion, Repubblika argued that it was not acceptable for the same people who gave their backing to Joseph Muscat, Keith Schembri, Konrad Mizzi and Chris Cardona to claim that they were not in any way responsible for what had happened.

The ongoing public inquiry into the assassination has seen a number of ministers – including Deputy Prime Minister Chris Fearne earlier in the day – seemingly attempt to distance themselves from Muscat’s inner circle and wash their hands off the matter. 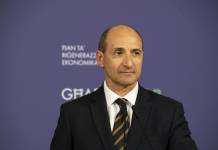 Repubblika also condemned Prime Minister Robert Abela for granting a one-time extension to the deadline of the inquiry, accusing him of seeking to stop “the independent inquiry that is revealing a small part of what his ministers have kept hidden.”

“Abela leads a government of monkeys that close their mouths, eyes and ears to see and hear nothing. And to remain silent whilst power is seized through theft and murder,” the NGO said.

But it added that this was not enough for Abela, who wanted the whole country to follow suit.

“Because Robert Abela knows that you can never have justice without truth. And without justice, he and his allies will never face consequences for turning a blind eye to the actions of Joseph Muscat and his clique,” Repubblika maintained.

“But we will not turn a blind eye. We have been asking for justice for the past three years, and we will not give up just because Robert Abela is tired of listening to the wrongdoing done by the government he supported and formed part of.”

The protest was not well-received by the Labour Party, which lamented the “many divisive words that were used today.” The party linked the protest to a state visit made by European Council President Charles Michel, though demonstrations have routinely been held on the 16th of the month in the past three years.

It insisted that the government did not want to stop the inquiry but to expedite it, arguing that this was according to the terms of reference agreed with the Caruana Galizia family.

“Instead of wasting time on politically motivated games which are only aimed at hindering the reforms and change this Government is bringing about, it would be better to let the process continue without any further interference so as to ensure that justice is ultimately done,” the party said.