Prison Director Alexander Dalli said that the greatest danger that a journalist can face is that one might sprain an ankle while walking or to get an electrical shock while turning on the computer. Dalli stated this while being interviewed during L-Erbgha Fost il-Gimgha, aired on TVM.

For this statement, Prison Director Alexander Dalli has issued an apology saying that his comments were not intentional.

Dalli was being interviewed about the work within the Corradino Correctional Facility, CCF and the challenges the officers face, when he compared such challenges with the work of journalists saying that journalists do not really face any danger apart from the possibility of spraining one’s ankle while walking or getting an electrical shock when turning on the computer.

Presenter and journalist Mark Laurence Zammit immediately noted how during the past three years what happened in Malta with the assassination of a journalist, the reality is far from what Dalli was comparing it to.

On the 16th of October 2017 investigative journalist, Daphne Caruana Galizia was murdered, with a car bomb, close to her home.

The Police has confirmed that the motive behind her assassination is not yes established but investigations are indicating that Caruana Galizia might have been murdered due to her published or soon to be published work.

PN and Opposition leader Bernard Grech has condemned the statements made by Prison Director Alexander Dalli and has called upon Prime Minister Robert Abela to immediately disassociate himself from Dalli’s behaviour, described as shocking.

In October Newsbook.com.mt reported that the Director of the Corradino Correctional Facility, has been seen, several times, walking around the prison with “privileged inmates, namely with Yorgen Fenech.”

Yorgen Fenech, the owner of the Dubai company 17 Black is being accused of complicity in masterminding the assassination of investigative journalist Daphne Caruana Galizia, back in 2017. 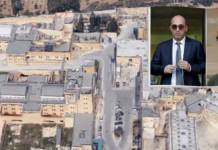 Outpouring of solidarity for Delia