During the visit, Her Majesty showed interest in developments in Malta and vividly recalled memories of her visits to the country.

Also on the President’s London agenda were a lecture on current security challenges in the Mediterranean at Chatham House, as well as a visit to patients and their relatives at the Puttinu Cares apartments and homes run by the Franciscan and Augustinian sisters, together with his wife.

President Vella also met with the Prince of Wales at Clarence House on Monday. during the meeting, President Vella and Prince Charles focused on Commonwealth issues, with a particular focus on the Commonwealth Heads of Government Meeting which will take place in Rwanda later this year. They also exchanged views on the current state of the global environment. 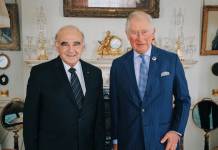