Speaking to the press after his first formal meeting with Abela, Mgr. Scicluna described the meeting as positive.

Mgr. Scicluna said that he respects Abela’s choices about Article 2 of the Constitution and his stance against abortion.

Article 2 states that “the religion of Malta is the Roman Catholic Apostolic Religion.”

Mgr. Scicluna said that it’s positive that Abela respects Malta’s history and that it shoulnd’t be cancelled for the sake of being liberal. He also added that the freedom of a person to hold no beliefs is also enshrined within the Constitution. He said that everyone should be allowed full religious liberty.

According to the Archbishop the abortion issue is a question of humanity.

“If we truly want to take care of future generations, we must allow them to be born,” said Mgr. Scicluna. He further added that society must not judge women but instead provide them with all the help and support they need. 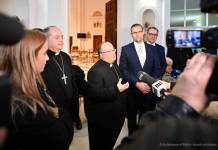 Coryse Borg   February 25, 2020
Carnival 2020 comes to an end today but it leaves behind numerous memories of a fun time which was had by both young and old.

Vox Pop: “It feels like the zombie apocalypse”; “too much fuss”

Monique Agius   February 26, 2020
This newsroom also asked the public whether they joined in the panic buying which we witnessed yesterday around the island. While some said that they stayed home and think that there was too much fuss when people rushed to their nearest supermarket to stock on items, a member of the public who went to buy flour and strawberries compared it to the zombie apocalypse.

Lent 2020: Pope Francis invites the faithful to embrace the paschal...