Delia said that Malta lost its democracy because of the power station project during the Partit Nazzjonalista’s Extraordinary General Council which kicked off this morning.

The theme of the conference is ‘Reform and Renewal – Good Governance and a Strong Democracy’. The PN is expected to present a number of proposals in light of the current political situation in Malta.

PN Leader Adrian Delia said that after 6 years of the Partit Laburista (PL) saying that Malta was in the best of times, now they are telling people that Malta is currently passing through its worst period ever.

Delia described Daphne Caruana Galizia’s murder as an institutionalised assassination. Delia said that the PN will continue fighting for justice. He added that those who allowed Caruana Galizia to be murdered due to their abdication of their responsibilities would pay for their wrongdoing.

During his speech, Delia called for every contract that former PL Minister Konrad Mizzi was involved in to be investigated.

In a brief comment before the start of the conference, Adrian Delia told Newsbook.com.mt that two important items will be launched today. One is about the internal reform within the PN and the other is the document about the extraordinary general council.

During the conference, PN Secretary General Clyde Puli said that while the PN believes that Joseph Muscat’s departure is only the first step towards healing. He said that there is a lot more which needs to be done.

The document was approved.

What did the middleman say? 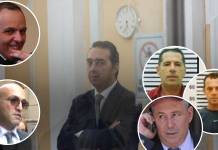 Malta Employers’ Association (MEA) Director General Joseph Farrugia who was invited as a  guest speaker said that a number of people are losing faith and now believe that to be a successful business person one needs to be corrupt. He said that Malta’s priority at the moment is not economic stability but rather is that justice is done in Daphne Caruana Galizia’s case. Caruana Galizia, an investigative journalist, was assassinated outside her home in 2017.

Former PN MP Tonio Borg asked whether or not the PL would have been elected had the Maltese public known about all the party’s hidden “filth”.

In his speech, Delia accused the PL of turning parliament into another government department. He also spoke of a case in which a number of people were denied access to the plenary chamber by the Speaker of the House.

“Solution is not musical chairs” – Delia

Delia also said that the solution to the current problems was not musical chairs. He said that Malta’s next PM should start fixing the mess Malta’s in.

According to Delia the PL started acknowledging that the PN was right about issues such as the police commissioner and president. He asked where the PL members were before.

The PN leader also reminded Health Minister Chris Fearne that he has access to the contracts related to the sale of Malta’s public hospitals. Therefore, Fearne could have a look at them to check whether or not anything was amiss.