While speaking to Newsbook.com.mt, President George Vella stated that one needs to remember those people that don’t celebrate Christmas holidays, as they would be ready to be called on duty to help those in need of assistance.

President Vella thanked all the members of the Civil Protection Department (CPD), who according to him, “risk their lives in order to save others”. He added that these members are all trained efficiently to ensure everyone’s safety.

An annual event to do something extra – Minister Farrugia

Minister for Home Affairs Michael Farrugia explained that while members of the CPD are there throughout the year for the public’s safety, this annual event serves as “something extra” for those people which contribute from the Community Chest Fund.

He insisted that the Community Chest Fund takes the extra step for those people in need, especially when it comes to diseases.

CPD Director Emmanuel Psaila described how apart from raising funds for L-Istrina, the event also serves as an exhibition of the department’s work and trucks to the general public.

Psaila appealed to the public to stay out of harm’s way and be responsible this festive season, to avoid driving under the influence of alcohol or while using a phone.

Our most used tool is our heart – CPD member

Marco Scicluna, a member of the CPD, told Newsbook.com.mt that although one needs to use his mind to ensure that no one is injured, the most tool used within the CPD is their heart.

Scicluna described how he had joined Civil Protection as a volunteer back in 2007, and later joined professionally in 2015.

When asked whether he remembers a specific experience throughout his career, Scicluna responded that he remembers them all. He added, however, that incidents where children are concerned are unforgettable.  He explained that most of the times, children end up suffering the consequences brought around by adults’ negligence.

Scicluna appealed to the parents to be more cautious in securing their children’s safety, as they solely “depend on us”. 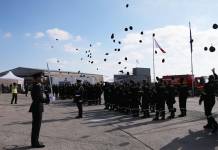 Reuters   July 8, 2020
Britain is prepared to leave the European Union on the same terms as Australia has with the bloc if it cannot agree on a future trading deal, Prime Minister Boris Johnson told Germany's Angela Merkel in a telephone call on Tuesday.