On Sunday, olympian swimmer Neil Agius completed his swim across the Malta-Gozo channel in just over two hours.

This challenge was no easy feat, as Agius was also pulling the weight of a person,dressed as Santa Claus, on a paddleboard.

This challenge aims to raise awareness about obesity. His friend Michael Galea has pledged to lose 10kg if Agius succeeds in pulling him across the channel.

In June, Agius completed a 100+ km swim from Sicily to Malta to raise awareness for Wave of Change Malta, which organises the ‘Clean Seas Campaign’.

Upon his arrival, Agius said: “All I’m asking is for people to join the Wave Of Change. Just pick up three pieces of plastic, put up a photo with #waveofchange, and tag three friends or colleagues to do the same.” 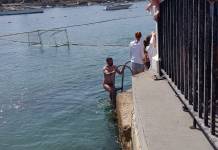