The Malta Union of Midwives and Nurses (MUMN) visited Pope Francis in Rome, where they handed him a nurse tunic signed by them.

For his part, the Pope handed MUMN a zucchetto worn by him to commemorate the Year Of Midwives and Nurses 2020.

A delegation from the union went to Rome this month to meet with the Pope after one of his General Audiences. It was said that the MUMN delegation and the Ambassador of Malta to the Vatican Frank Zammit have been looking forward to this visit since last year.

MUMN President Paul Pace said the shirt passed to the Pope was a sign of appreciation, and was signed by many nurses and midwives working in wards with patients. He explained how Pope Francis’ support in nursing is encouraging for them, especially during the Coronavirus pandemic.

On the International Nurses’ Day last May, the Pope described them as heroes, insisting that they are “the saints who live next door”.

“Let us pray for nurses, men and women, young and old,” stated Pope Francis, who went on to describe this work not only as a profession, but as a “vocation and a dedicated life.”

The Pope’s speech:
What is the Pope doing during the pandemic? 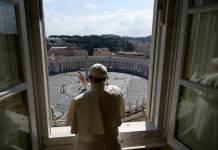