As the controversial project on the former Institute of Tourism Studies (ITS) got approved earlier on Thursday, many have taken to Facebook to express their frustration. At the end of the hearing, those who were allegedly brought to the hearing by the developer himself, others decried the approval of the permit as “shameful”.

St Julian’s, Pembroke and Swieqi Mayor gave their comments to Newsbook.com.mt following the approval of the project.

St Julian’s Mayor Guido Dalli told this newsroom that the “monster” was not just ugly but will also cause a great inconvenience in terms of infrastructure and traffic. He said that public land was effectively given away only for the rich to be made even richer. Swieqi Mayor Noel Muscat that he was disillusioned especially after having followed the presentations made by the architects and case officer. He spoke mainly of the traffic which would result from this development concluding that he still cannot understand how the project was approved. Pembroke Mayor Dean Hili in comments he gave to this newsroom said that the exercise we had just witnessed was purely from a legal and policy basis. Hili said that from the replies given today given by the same authority it seems that such infringements did not exist. Hili argued that given the number of objections filed against the project, he believed that the Authority had a bigger role to play in mediating between the developer and those objecting to the project. When asked if the Local Council would be appealing the decision he said this has to be still evaluated.

Of those who commented on the matter is cartoonist Steve Bonello who uploaded a simple image with the words “Pem Broken”.

Author Immanuel Mifsud posted “I lit a candle for my country” on black background. While The Shift News co-founder Caroline Muscat said in a post that no one should have expected to influence the Planning Authority board. Muscat said that back in 2016, Silvio Debono had already started selling apartments from the project even though the land transfer had not yet occurred. She continued to say that maybe now the public would realise that this was a pre-electoral deal rather than a democratic process.

The President of the Local Council Association Mario Fava expressed his solidarity towards the three most affected local councils with the project saying he was against the project. In a long Facebook post, Fava said that before such projects are approved one has to make sure that the infrastructure in the area was adequate saying that such a study was not carried out. Fava said that the upgrade in the infrastructure should be shouldered by the developer rather than the government forking out money to accommodate a developer. 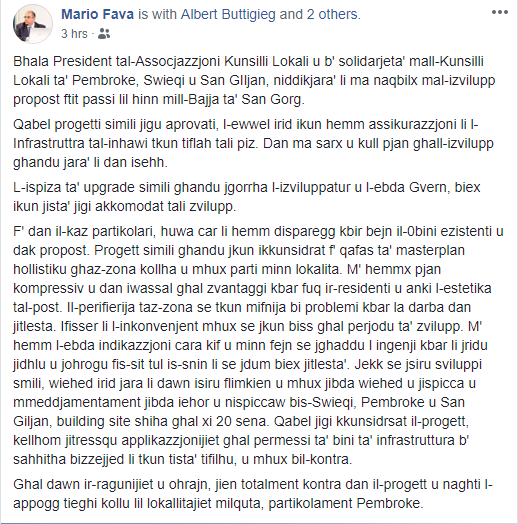 Former One journalist Paula Cauchi took to Facebook to express her disappointment at the approval of the projects. She described it as a “sad day” for the locality.

I feel I can post this cartoon now! Shame. I think residents should always be the ones that sway decisions of this type. Too much money (overhanded and underhanded) involved, though. Damn!

The environmental non-governmental organisation BirdLife-Malta in a Facebook post said despite the unprecedented opposition against the project it was still approved. 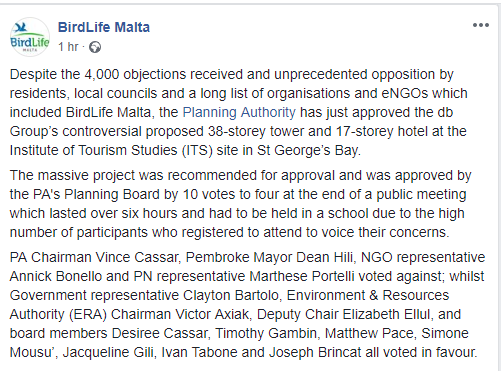 In a statement Alternattiva Demokratika – The Green Party of which representatives were present at the hearing said that it was not surprised at all by the decision taken on the project. The Party’s Chairperson Carmel Cacopardo noted that the Government had long shown its total and unconditional support in favour of the project. Cacopardo commented on the price at which public land was given away and the fact that the project hinges on a Government promised tunnel without which the project would not be viable. He went on to accuse the Government of using taxpayer’s money for the sake of private profit at the expense of the community. Cacopardo went on to decry the Planning Authority for showing its insensitivity towards the impacts of massive projects on people.