Maltese media needs black representation,which people of colour and children of biracial families can relate to, Regine Psaila told Newsbook.com.mt during an interview.

Regine, who is originally from Cameroon, moved to Malta four years ago after meeting her husband. At present, she is reading for a Diploma in Journalism at the University of Malta.

This newsroom interviewed Regine about her experience in Malta and her work within the African Media Association.

Asked about her transition to Malta, Regine said that the difference could be felt, since she went from a huge country full of trees to a country the size of a part of her village.

“At the beginning, I felt trapped. I wanted to take the car to go on a three-hour drive; I couldn’t do that,” she recalled, adding that now she is used to the country.

Regine is a manager at the African Media Association, a local NGO, working in the field of migration and inclusion of asylum seekers in Malta. The NGO also works in the media. Through the association, programmes aimed at asylum seekers are drafted, through which they are helped to tell their story, whether it is a positive or a negative one.

Regine is advocating the need to have black representation in the media, noting the diversity in society – Maltese children who are black, biracial couples and adopted children. “This is their country and they need to see someone who looks like them in the media,” she elaborated.

”I look up to Michelle Obama, for example. She has inspired me a lot. She was so strong in that difficult position, despite being so hated. Having someone like that empowers one to say ‘I can make it’,” Regine maintained.

Having black representation in the media would empower young black people who face widespread discrimination even at schools, she remarked. People of colour also face discrimination in nightclubs, with many of them being denied entry, Regine noted. She added that a voice that would denounce actions such as these is needed in the Maltese media.

“Studying was my dream”

Regine will finish her diploma next year. Speaking to Newsbook.com.mt, she remarked that she found a huge opportunity to continue learning and studying since access to education is free, adding she wished she had been here at the age of 10.

“Studying was my dream. Being able to school and the university for free was great. I’m learning many things which I would have loved to have learnt at a younger age,” she remarked.

We belong to planet Earth

Regine is a strong believer that humans belong to planet Earth.

“We have to overcome our barriers and boundaries, and just say we are human,” she explained.

“Yes, the cultures are different, in my home country, I eat couscous with my hands; here, I use a fork. But it is the same couscous which is eaten here in Malta and which you find in Italy and everywhere,” she observed.

Differences in cultures are the result of people who want to focus on small things which sometimes are not so relevant, she added, further noting that ”we breathe the same air”.

“We talk the same languages. A language – you learn it. I speak Italian and am learning Maltese. I hope that by the end of my life I will manage to speak it,” she maintains, noting that there aren’t many huge differences except in cases where people refuse to break the boundaries and recognise that we are all the same.

Asked whether she has experienced racism herself, Regine replied in the affirmative. She mentioned incidents when bus drivers do not stop for two Africans waiting on a bus stop or when people refuse to let her have an empty seat.

“On public transport, you find a lot of nasty things happening,” she remarked. 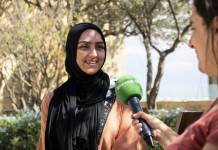