Partit Nazzjonalista leader Adrian Delia has stressed that Malta cannot be left alone to face the challenges brought about by migration during a European People’s Party summit held on Thursday morning. The Nationalist leader underlined that immediate action was required.

Speaking during a video conference, Delia touched upon survival and the need for a financial package to safeguard jobs in the bloc; solidarity when it comes to addressing the challenges posed by migration, sustainability and the economy in a post-coronavirus scenario and the threats posed to European democracy by member states which are using the pandemic to seize more power and disregard fundamental human rights. 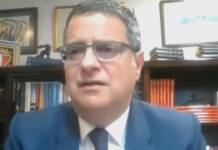 Delia told his European counterparts that Malta cannot be left alone dealing with migration and highlighted that this was a humanitarian crisis. He explained that the systems were overwhelmed dealing with the coronavirus outbreak in the country. He added that the initial reception centres where asylum seekers are welcomed upon disembarking were overcrowded and Malta was struggling with welcoming new individuals. He urged his counterparts to act without delay.

Delia has called on the European Union to prioritise a discussion on migration. The calls intensified following the recent dramatic episodes.

The Nationalist leader said that the Opposition was lending its full support to the health authorities who are on the frontline responding to coronavirus epidemic in Malta. During his speech he said that Opposition had put forward a number of proposals aimed at strengthening the local economy which has been adversely affected. Delia remarked that some of the proposals were taken up by the government however more needed to be done to safeguard jobs and self-employed individuals from burning the brunt of the economic crisis sparked by the outbreak.

Speaking about a post-coronavirus scenario, Delia stressed that this should be built around four main principals – survival, solidarity, sovereignty and sustainability. The European Union requires a new vision for its economy which would address the new realities brought about by the public health crisis. He stressed on the need to safeguard jobs and at the same time create new sectors which would create jobs.

Delia said that more European solidarity with frontline states in the migration issues. He underlined the need for immediate European action. Ahead of the summer season, Delia remarked that thousands would seek to flee war torn Libya and reach European ports, as he spoke specifically about the deadly Central Mediterranean route.

On sovereignty, the Nationalist leader flagged “dangerous behavior” adopted by certain European governments who were taking advantage of the current pandemic to seize more power and take hostage their countries’ institutions. Delia said that the European Union needs to act to safeguard democracy.

He also spoke about sustainability and climate change.